Nike suppliers moved in and out of compliance with labor laws. Locke concluded that capability-building, as when buyers help their suppliers to raise productivity and share the gains with employees, offers the most promise to improve wages and working conditions for low-wage workers when governments are unable or unwilling to enforce labor laws. 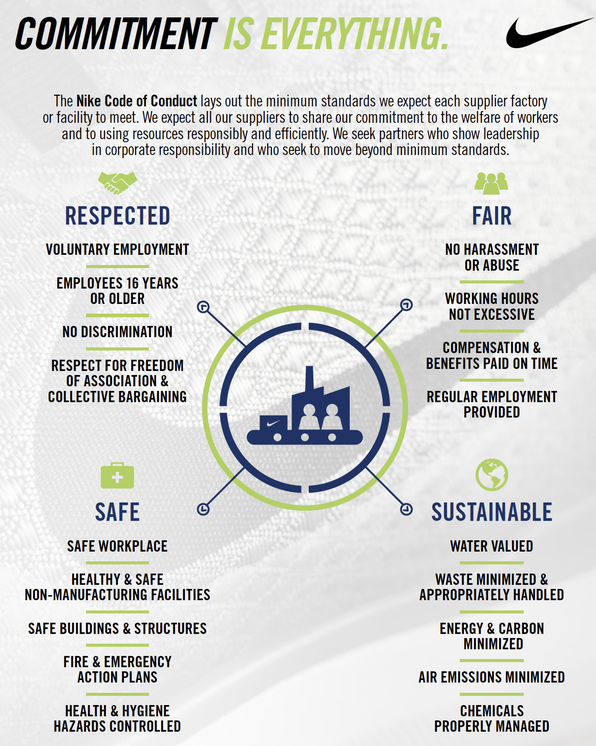 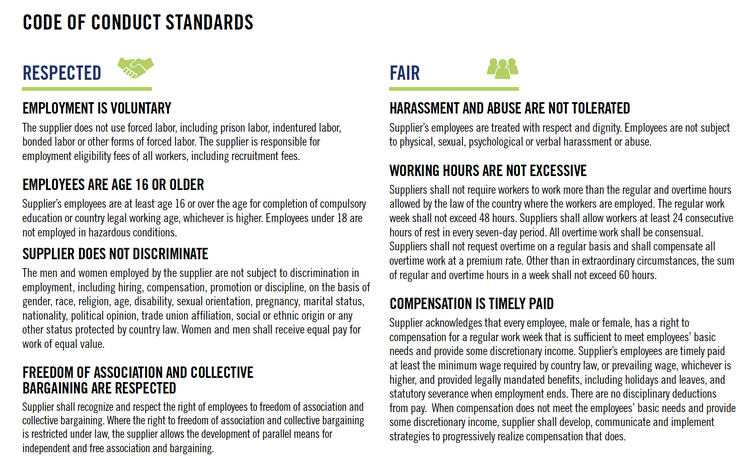 Respected. Employment is voluntary. Employees are age 16 or older. Supplier does not discriminate. Freedom of association and collective bargaining are respected.

Fair. Harrassment and abuse are not tolerated. Working hours are not excessive. Compensation is timely paid.

Nike, named for the Greek goddess of victory, is the most valuable apparel brand in the world, worth more than twice as much as Adidas, its closest sportswear rival, and more than Louis Vuitton, Gucci, and Chanel. Founded in 1972 by Phil Knight and his former University of Oregon coach Bill Bowerman, Nike’s swish and just do it slogan have joined the ranks of iconic brands such as Apple and Coke to generate sales of $45 billion in 2021. Basketball star Michael Jordan was the first major sports figure to endorse Nike, and today stars and teams in a wide range of sports are Nike ambassadors.

Most Nike shoes and apparel are produced by contractors in Asia. Reports of poor working conditions in these factories in the 1990s prompted Nike to develop labor standards for its contractors and require them to be audited and certified as in compliance with local labor laws by independent third parties. Locke reviewed these audits and revisited some of the factories.

Most Nike supplier factories are in Asia 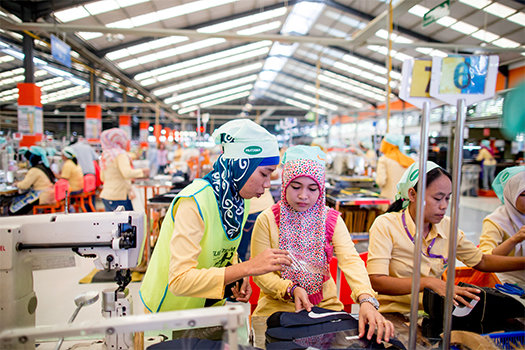 Locke found that coercion failed to ensure compliance in the factories supplying Nike. Many Nike contractors were in compliance for audits, which typically take several days and cost the factory several thousand dollars, and then slipped into non-compliance when faced with pressure from Nike to reduce costs or meet deadlines.

Locke traces the roots of the coercion model to three assumptions about the relationship between buyers and suppliers. First, researchers such as Gary Gereffi believe that buyers have power over their suppliers, so that a buyer threat to stop purchasing from non-compliant suppliers will force them to comply. Second is the belief that audits can detect non-compliance, and third is the notion that continued compliance is in the economic interest of the supplier because certification means more contracts and/or higher prices from buyers.

Coercion assumes that buyers have more power than suppliers, and can impose and enforce codes of conduct on suppliers 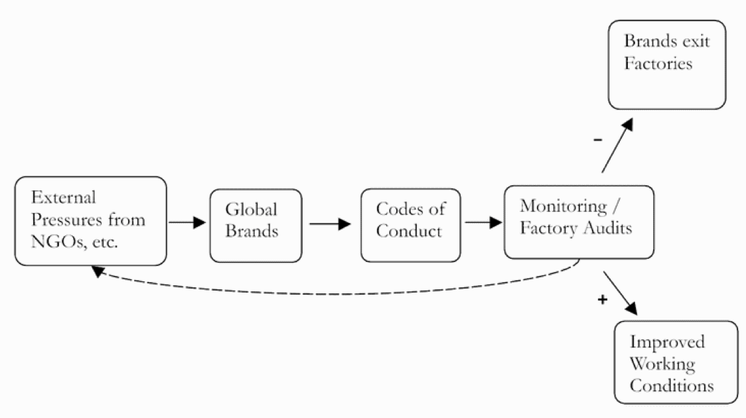 Locke found that these assumptions were wrong. Some of the Asian factories that produce footwear and electronics for global brands are large businesses that sell to many buyers, giving them bargaining power. Buyers often put shoe or apparel purchases out to bid, so that a certified factory may not win a continuing stream of orders from a particular brand. Buyers are reluctant to break ties with supplier factories that produce desired goods on time and at cost, and justify continuing to work with out-of-compliance factories by saying that purchasing from the factory gives the brand leverage to improve conditions for its employees.

Commitment is the marriage-like suggestion that buyers and suppliers forge long-term relationships and adapt to each other’s changing needs, or when violating employers sign compliance agreements with government agencies that involve regular reporting to ensure that the employer does not revert to non-compliance. Locke found that long-term relationships between buyers in rich countries and suppliers in poor countries did not lead to sustained compliance with labor laws. Locke did not study compliance agreements between employers and government agencies.

Locke believes that capability-building is most promising. Many factory managers are not trained in how to improve margins by boosting productivity; instead, they seek to raise profits by reducing costs. Locke found examples of factories that received capability-building help from buyers such as Ikea to improve productivity and share some of the additional profits with their employees.

Ikea works with its suppliers to raise productivity 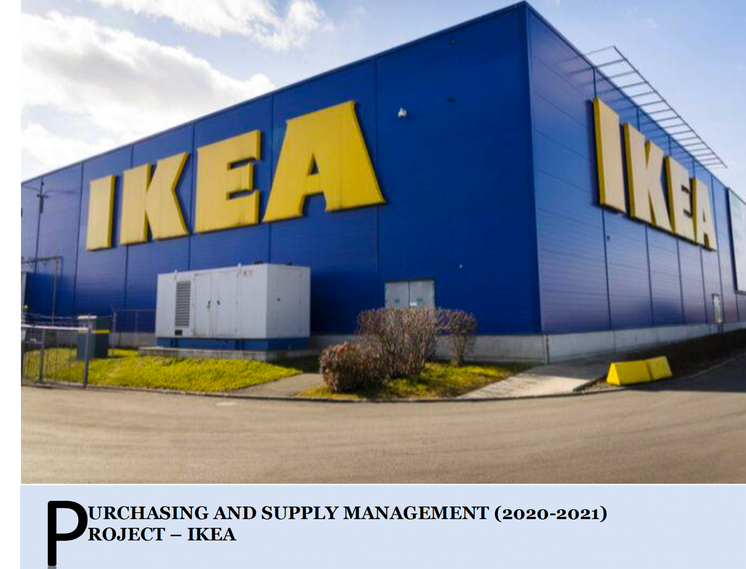 Mexico. Locke and Romis compared two Mexican garment factories that received similar scores of 86-87 on Nike’s most comprehensive audits and found very different wages, working conditions, and employee satisfaction, a result they attributed to the checklist nature of audits.

One factory near Mexico City that was owned by a Mexican family for over half a century organized workers into teams, with workers performing multiple jobs and encouraged to submit suggestions to raise productivity. The other factory was owned by a Taiwanese-based firm that had its employees specialize in one task.

Both factories were unionized and paid the same 65 peso ($6) daily minimum wage and offered bonuses for overtime work and exceeding production quotas. Workers at the team-factory near Mexico City earned more, 960 pesos a week, than the individual-employee factory, 765 pesos a week, and were more satisfied with their jobs.

Locke and Romis found that even rigorous audits of suppliers can conceal as much as they reveal. They conclude that continuous interactions between buyers and suppliers, the capacity-building model of Ikea, are most promising to raise productivity and share the gains with employees.

5 Lessons. Analysis of several years of Nike audit reports led Locke to five major conclusions. First, private company codes of conduct imposed by buyers on suppliers have limited long-run effects on employee wages and working conditions because supplier factories move in and out of compliance. Factories pay for audits, make short-run changes to pass audits and then slip back into non-compliance. Auditors whose jobs depend on factories hiring them are under pressure to find that their clients in compliance.

Second, raising the capability of supervisors may be the best way to improve efficiency and increase profit margins, since the extra profits from improved productivity allow suppliers to comply with labor laws and to raise wages and improve working conditions. Suppliers whose operations are barely profitable are most likely to see employees as a cost to be minimized rather than as partners in production.

Third, generating extra profits raises the question of how to share them between buyers, suppliers, and employees. The actual distribution of productivity gains reflects buyer-supplier relationships, government laws and institutions, and labor market conditions such as the supply of and demand for workers and whether employees are represented by unions.

Fourth, some poor working conditions such as excessive overtime arise from buyer practices. For example, buyers who are uncertain about how much clothing, shoes, or electronics will be sold may hold minimal inventories. If an item proves to be popular, buyers place orders for additional supplies with tight delivery timelines, which can lead to excess work hours and suppliers turning to contractors to obtain additional workers. Locke emphasizes that the source of some violations in a downstream workplace may have roots in risk-minimizing behavior upstream in the supply chain.

Agriculture. The Los Angeles Times in December 2014 published a four-part series entitled Product of Mexico that highlighted child and forced labor on Mexican farms that export fruits and vegetables to the US. In response, US buyers called on their Mexican suppliers to comply with labor laws, Mexican exporters formed associations such as AHIFORES to promote compliance, and the Mexican government stepped up enforcement of labor laws.

Two US-based associations, United Fresh and PMA, developed an Ethical Charter on Responsible Labor Practices that called on employers in the fresh produce industry to comply with applicable labor laws and to treat employees with respect. The Ethical Charter has 13 standards grouped into three categories, labor laws, human rights, and professional conduct.

2014: Richard Marosi's and Don Bartletti's four part series highlights brutal labor issues on Mexican farms supplying major U.S. distributors and retailers. 2015: United Fresh and PMA formed a joint committee with 16 buyers and suppliers to explore an industry-wide global approach to responsible labor practices for the fresh produce and floral industries. 2016: Working groups of buyers and growers discussed best practices. 2018: After extensive work with industry members, expert consultants and an open public consultation period in 2017, the associations adopted the final Charter in January 2018 as a standard recommended for all inudstry members.

Perspective. Locke emphasizes the limitations of buyer-developed codes of conduct to effectuate lasting improvements in the wages and working conditions of low-wage workers. Most employment codes of conduct require suppliers to obey local labor laws and are enforced by third-party auditors who spend several days interviewing workers and managers and answering yes or no to a list of questions.

Auditing benefits firms that can document the existence of policies in each area covered by the code. However, auditors are much less effective at determining whether these policies are implemented on a day-to-day basis or whether employees in firms that “pass” audits are satisfied with their wages and working conditions.

The best guarantee of labor law compliance is labor market pressure or the inability of non-compliant firms to hire workers. If there are more jobs than workers, market forces put upward pressure on wages and encourage employers to improve working conditions and benefits. Conversely, when there is an ample supply of workers, employers can hire workers without raising wages, enforce tough productivity standards, and limit benefits.

Goldman, Robert and Stephen Papson. 1998. Nike Culture: The Sign of the Swoosh. 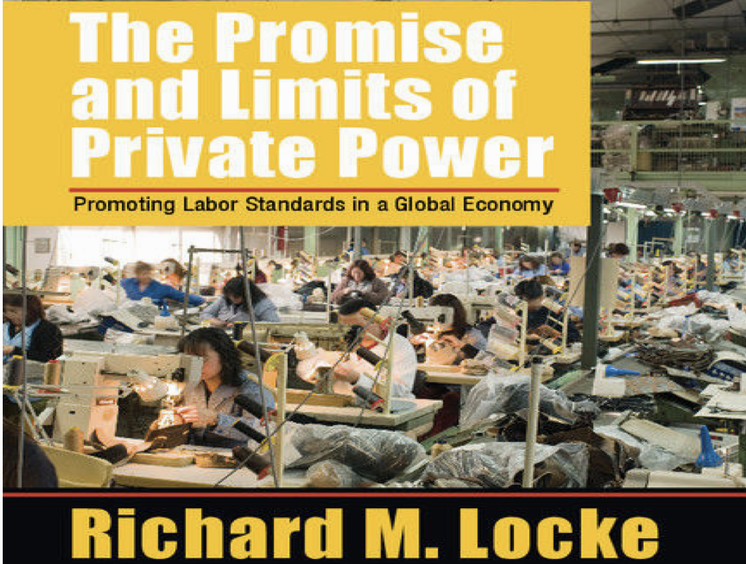