There is no uniform federal definition of migrant farm worker. Migrants in the NAWS moved at least 75 miles to obtain a farm job or had at least two farm jobs that were at least 75 miles apart during the previous year. In 2019-20, there were (1) domestic migrants who moved from e.g. south Texas to Michigan, and (2) international migrants who moved between homes in Mexico and farm jobs in the US, sometimes called green-card commuters. Some 15 percent of crop workers were migrants, including half who migrated within the US. 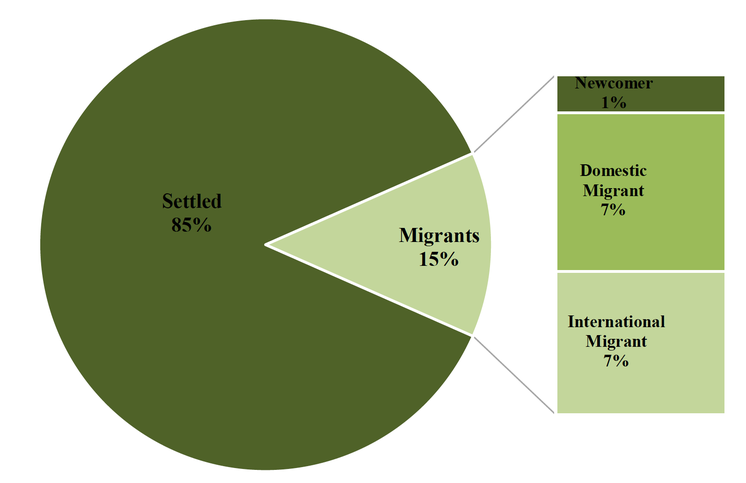 Some 250,000 H-2A guest workers who were employed in US agriculture for an average six months in FY20 are excluded from the NAWS. If H-2A workers were included in the NAWS, the share of Mexican-born and legal workers would rise, the average age of workers would fall, and average hourly earnings would rise. H-2A workers are more likely to be employed by FLCs and more likely to fill harvesting jobs, and less likely to receive contributory or means-tested benefits.

Employers are required to provide H-2A workers with housing at no charge. If H-2A workers were included in the NAWS, the share of crop workers who live in employer-provided housing would rise.

Demographics. The average age of US crop workers fell during the 1990s and has been rising since, to 41 in 2019-20. Almost 20 percent of the workers interviewed in 2019-20 were 55 or older, over half were married, and almost all married crop workers had children. 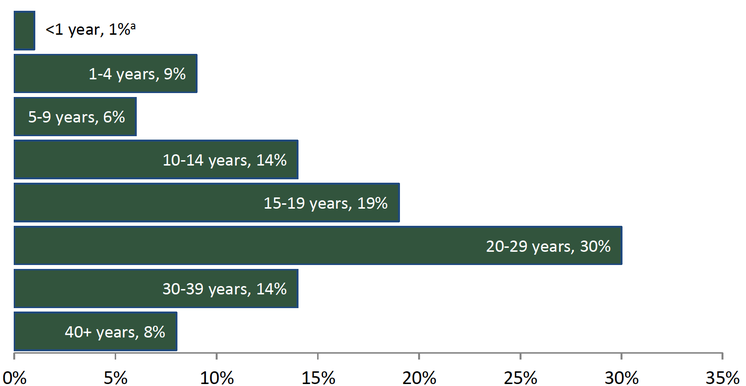 Like average age, the average years of schooling of workers dipped in the 1990s as young and unauthorized rural Mexicans arrived in large numbers, but began to rise after 2000 as education levels rose in both Mexico and the US, to an average nine years for US crop workers in 2019-20. A third of workers interviewed in 2019-20 had six or fewer years of schooling, while a seventh completed high school. 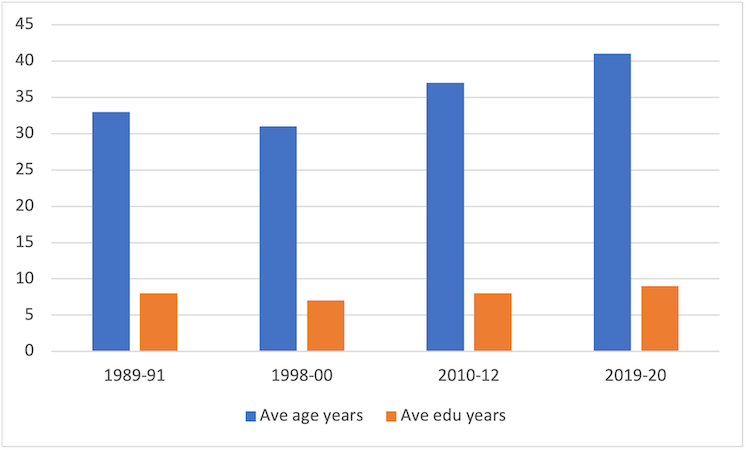 Over half of farm workers in 2019-20 rented housing, usually detached single family homes that were less than 25 miles from their current farm job; three-fourths of crop workers drove a car to work. Most crop workers rented a single family home from a landlord who was not their employer, and a third owned the home where they lived. 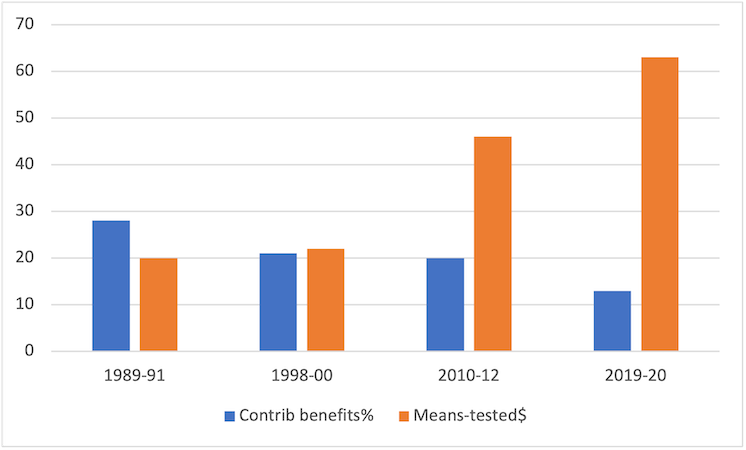 Almost two-thirds of NAWS workers reported that someone in the household received a means-tested benefit during the previous two years, led by 44 percent who reported Medicaid benefits, 13 percent SNAP benefits, and nine percent WIC benefits.

Almost 90 percent of the minor children of crop workers had health insurance, usually provided by a government program.

90% of crop worker children had health insurance, usually from a government program

Employment. The NAWS interviews mostly crop workers who are hired directly by farm operators, 88 percent in 2019-20, and who perform non-harvest tasks in FVH commodities, 82 percent, including:

Much crop work is seasonal, and many crop workers also have non-crop jobs, often in maintenance or animal agriculture. Half of the crop workers interviewed in 2019-20 reported at least 15 days of non-crop work during the year, and 70 percent left these non-crop jobs voluntarily. Most crop workers were born in Mexico, and over half said that their parents never worked for wages on US farms.

¾ of crop workers want to continue to do farm work

Workers reported working an average 46 hours in the week before being interviewed. Hours were longer for the fewer workers in field crops and shorter for the majority of workers employed in fruits and vegetables. Workers who were harvesting had the fewest hours worked during the previous week, and piece rate workers worked fewer hours than workers who were paid an hourly wage.

Harvesting workers had the fewest hours per week

Over 80 percent of crop workers had a US asset, typically at vehicle; a quarter owned or were buying US homes

Perspective. The NAWS is the best source of reliable data on the characteristics of the non-H2A crop workers, profiling 1.8 million to 1.9 million of the 2.5 million workers employed for wages in US agriculture each year. The NAWS is widely cited as the source for:

The NAWS does not include H-2A or livestock workers. If the H-2A workers who fill almost a sixth of jobs in US crop agriculture were included, the crop workforce would be younger, more migrant, and more legal, especially in Florida and the southeastern states where the share of H-2A workers is highest. If livestock workers were included, the NAWS would likely find a higher share of older and settled workers employed by one employer for more days a year.

The Farm Workforce Modernization Act approved by the House in March 2021 would legalize unauthorized farm workers and make it easier for farmers to employ H-2A workers, including in year-round jobs in animal agriculture. If the FWMA were enacted, the result could be an exit of older and now legal Mexican-born workers and their replacement by younger and legal Mexican-born guest workers. Including H-2A and animal agriculture workers in the NAWS would help to monitor changes in the farm workforce before and after immigration reforms.

The 2019-20 report includes eight columns of data that chart changes in major demographic and employment variables over time. For example, the share unauthorized fell in the 1990s as newly legalized SAWs were replaced by unauthorized workers, and then stabilized at about 50 percent between 2000 and 2017-18, when there was a drop to 36 percent unauthorized followed by a rebound to 44 percent in 2019-20. With about 2,000 interviews in each cycle, this suggests that 700 to 900 unauthorized workers are interviewed.