The cruise industry depends on the migration of workers and guests. Some 225,000 crew from many nations provided services to 30 million cruise passengers in 2019 on 270 ships. Cruise ships accommodate 100 to 6,000 passengers each, and most have one crew member for every two to three passengers.

Cruising stopped in March 2020 due to covid, and resumed in limited fashion in summer 2020, expanded in 2021, and returned to pre-covid levels in 2022. Some older ships were scrapped, but newer and larger ships mean that the number cruise guests who can be accommodated continues to increase. There are about 350 cruise ships that can accommodate 600,000 passengers.

Passengers. Some 52 percent of cruise passengers in 2019 were from Canada and the US, followed by a quarter from Western European countries, an eighth from Asia, and five percent from ANZ.

By country, some 14.2 million Americans cruised in 2019, followed by 2.6 million Germans, two million British, 1.9 million Chinese, 1.2 million Australians, and a million Canadians. China overtook Germany and the UK as the second leading source of cruise passengers in 2017-18. However, requirements that Chinese cruise passengers purchase their tickets from Chinese travel agencies reduced per-ticket revenue for the cruise lines and resulted in the relocation of some ships to other markets in 2019. 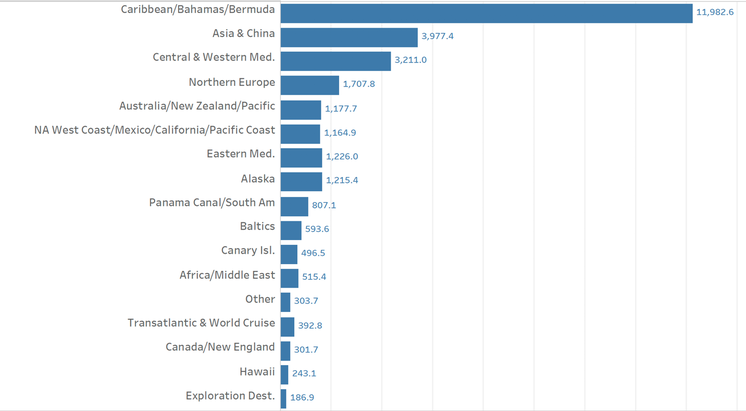 There are 1.2 billion people in the high-income or more developed countries, and 19 percent are 65 and older. The cruise industry reports passengers by decadal cohorts, and reported that a quarter of cruise passengers were 65 and older in 2019.

A quarter of cruise passengers are 60 or older

Most cruise passengers are seeking exploration and escape, which translates into offers of sun, sea, and sand as well as a safe environment to explore new areas and cultures. Shipboard amenities such as food and entertainment, as well as experiences in the ports that are visited, are cited by passengers as the reason they selected a particular cruise.

Industry. Modern cruising developed in the 1970s, offering winter vacations to Canadians and Americans in the Caribbean; North Americans were over 80 percent of global cruise passengers in 1995. As more Europeans began to cruise in the 1990s, the industry developed ships and destinations that appealed to them, beginning a process of product differentiation that expanded as more Chinese began to cruise in the 2000s.

The global cruise industry is dominated by three firms with multiple brands that accommodate three-fourths of cruise passengers: Carnival carried 13 million passengers in 2019, Royal Caribbean, 6.5 million, and Norwegian, 2.7 million. The Big 3 had combined revenues of $38 billion in 2019, including $21 billion for Carnival, $11 billion for Royal Caribbean, and $6.5 billion for Norwegian. About 68 percent of cruise revenue is from ticket sales and 32 percent from on-board sales. Payroll costs of $4 billion were almost 20 percent of the Big 3’s $22 billion of operating costs.

Geneva-based MSC is the fourth largest cruise company, with revenue of Euro 3.2 billion in 2019. Genting’s Hong Kong subsidiary, which owns Crystal, Dream, and Star Cruises as well as the German shipyards MV Werften and Lloyd Werft, filed for bankruptcy in January 2022, forcing the Crystal Symphony and Serenity ships, which had unpaid fuel bills in Florida, to end voyages in Bimini rather than Miami to avoid being seized.

People returned to cruising in 2022 as covid waned and ships permitted 100 percent occupancy. The three major cruise lines have very high net debt levels of five to six times their Ebitda, up sharply from low debt levels before covid. Shipbuilding countries heavily subsidize the construction of the newer ships desired by cruise guests. A recession or other event that reduces demand for cruising could threaten the viability of heavily indebted cruise lines, forcing some to follow Genting into bankruptcy.

The Big 3 cruise lines have been expanding, building ever-larger ships that take advantage of economies of scale. The Titanic, the largest passenger ship in 1912, was 882 feet long and accommodated 2,435 passengers, while the Symphony of the Seas is 1,184 feet long and could accommodate up 6,680 passengers. The economics of cruise ships are similar to airlines, viz, high fixed and low marginal costs, which encourages ever larger ships that and planes that are full. 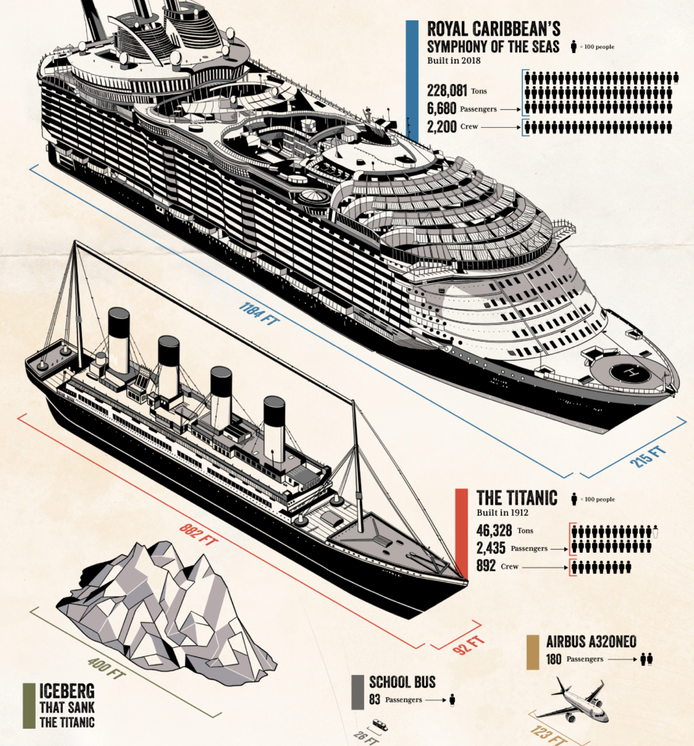 Separating the country of ownership from the country of operation via flags of convenience has a long history, and was accelerated in the US first by prohibition, since foreign-flagged ships could serve alcohol, and then by WWII, when some US ships taking war materials to the UK in the late 1930s were reflagged in Panama to avoid attacks by German submarines.

After WWII, over 1,100 wartime Liberty ships were sold to owners who operated them under foreign flags; the US encouraged Liberia to become a flag of convenience to compete with Panama (some 2,700 Liberty ships were built during WWII). Some governments rely on private US-based businesses to operate their ship registries, as with Liberia’s registry that is located in suburban Wash DC. A cruise ship could be built in Italy, owned by a Liberian-registered firm, flagged in the Bahamas, and staffed by crew members from many nations.

Labor. Cruise ship workers live on ships and often work long hours; labor and fuel are each 20 percent of the cost of cruise lines. Crews are among the most multinational of any industry; many ships have crews from 50 or more countries. Most cruise companies rely on employment or manning agencies in worker countries of origin to screen, train, and sign contracts with crew members.

Most cruise ships divide their workforces into marine, 15 percent of crew, and hotel, 85 percent. Within the hotel division, there are typically five categories of employees: guest services, cabin, bar and food, galley and other.

Most cruise ships have six senior staff positions: captain, staff captain, chief engineer, purser, cruise director, and doctor. Junior officers include second and third engineers on the marine side and managers of various hotel departments in the hotel division, while petty officers include chief waiter and entertainment staff. Remaining or rating staff include other workers, such as waiters, stewards, and cleaners.

The ILO’s Maritime Labor Convention, which entered into force in August 2013, caps work hours on ships at 14 a day and 72 a week, guarantees medical care and social security, and sets standards for crew accommodations; the minimum wage for seafarers is $658 a month after January 1, 2023 and $673 after January 1, 2025. The MLC can be enforced by government agents of the ship’s flag country, which is rare, or by government agents in the ports where the ship docks. Most enforcement of the MLC occurs in countries where ships dock.

Covid. The covid pandemic brought cruising to a stop in March 2020, especially after several Carnival Princess ships became symbols of the rapid spread of covid on ships. The Diamond Princess was quarantined for 15 days in February 2020 in Yokohama, Japan with almost 20 percent of the 3,700 crew and passengers infected. The cruise industry responded to the loss of revenue in 2020-21 by selling stock and borrowing as well as retiring older ships and slowing the delivery of new ships. 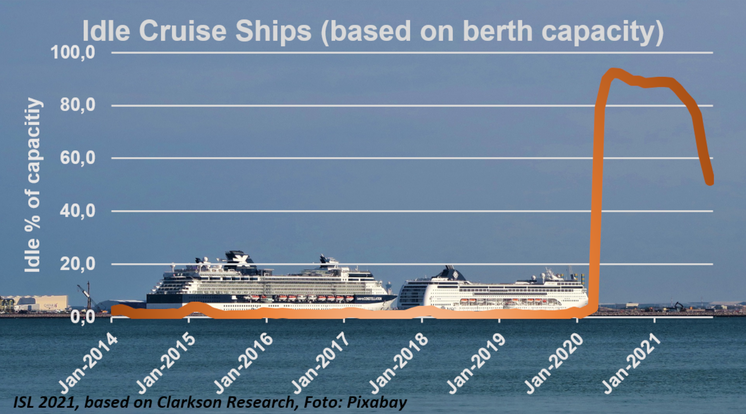 Cruising with restrictions resumed in the Mediterranean in summer 2020 and in North America in summer 2021; most cruise lines required crew and passengers to be vaccinated. The US government made an exception to the Passenger Vessel Services Act of 1886 and the Jones Act of 1920, laws that require ships that sail only between US ports to be built and staffed by Americans, so that cruise ships could sail from Seattle to Alaska ports without stopping in Canada.

Cruise prices are normally lowest during the first quarter of the year, the so-called wave season when many ships are in the Caribbean. With most ships returning to service in summer 2022, many cruise lines reduced prices to encourage last-minute bookings, including fares of $100 per day per person for interior cabins on large ships.

All of the 17 superyachts completed between 2010 and 2020 were bought by Russians or citizens of Gulf oil exporters. Superyachts can cost $1 million a foot, or more than the most expensive real estate, which was $240 million paid by billionaire Ken Griffen for a quadruplex in Central Park South in 2019. Observers note that most people spend more time at home than on their yachts, even though yachts may cost more than homes.

Today’s yachts are much larger than those of the late 1800s, when a rule of thumb was that the length of a rich man’s yacht in feet should match the owner’s age in years. Unlike 19^(th) century yachts, today’s have helicopter pads, personal submarines, and extravangant state rooms and art. The combination of covid and wealth have increased the demand for yachts, which are supposed to carry no more than 12 guests, although they can have up to 50 crew. Many superyachts are built in Livorno, Italy.

Superyachts were in the news after Russia invaded Ukraine February 24, 2022 and many Russian yacht owners had their assets outside Russia frozen. At least six superyachts were confiscated by governments that imposed sanctions on Russian oligarchs, including the Dilbar, a 511 foot long ship with the largest interior volume of any yacht that is associated with Sergei Chemezov, the head of the conglomerate Rostec. 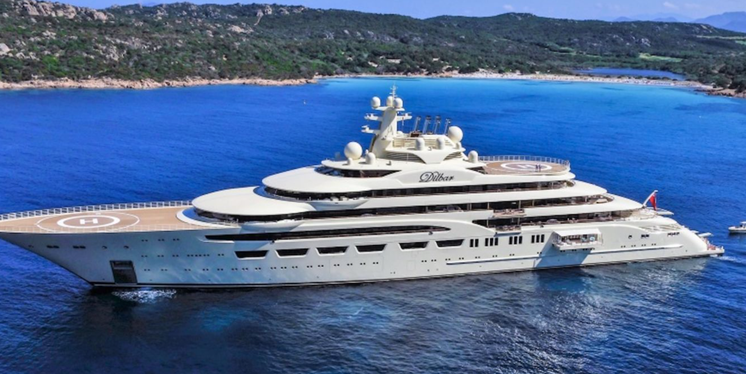 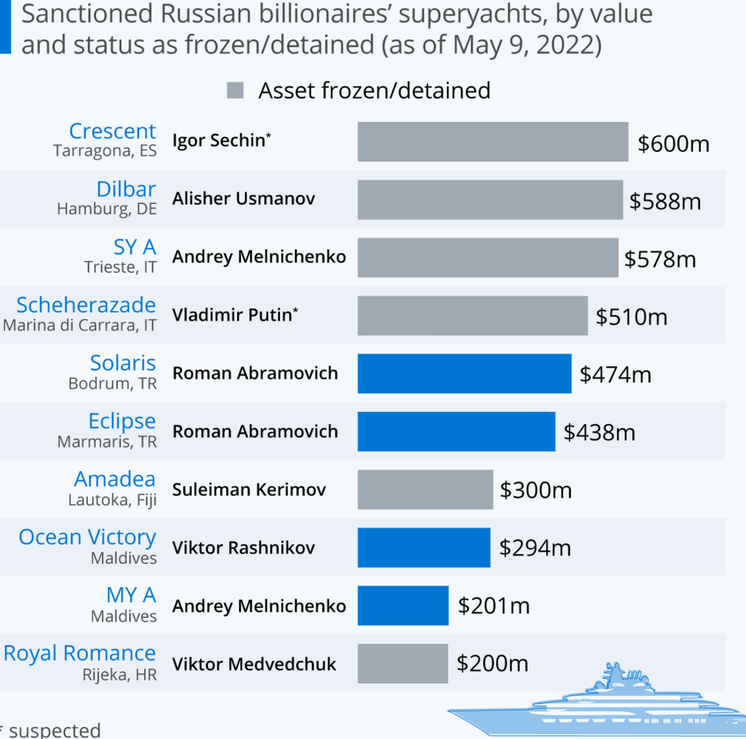 The US created the KleptoCapture task force in spring 2022 to seize the assets of Russian oligarchs whose fortunes are derived from corrupt ties to President Vladimir Putin. KleptoCapture began investigating Monaco-based Imperial Yachts, which arranges for the building and staffing of yachts for Russian billionaires. Imperial supervised the construction of the Scheherazade and the Crescent yachts tied to Russians.

Wu, B. 2005. The World Cruise Industry: A Profile of the Global Labor Market.https://www.sirc.cf.ac.uk/Uploads/In%20House/WorldCruiseIndustry.pdf