The US has more immigrants than any other country, 47 million in 2022, making immigrants almost 15 percent of US residents. Unlike other countries with higher shares of immigrants such as Australia and Canada, almost a quarter of the immigrants in the US are unauthorized.

The UN defines an international migrant as a person who moves from one country to another for a year or more, for any reason and with any legal status, including unauthorized status. Some 280 million or 3.6 percent of the world’s 7.8 billion people are international migrants. The US has a sixth of the world’s migrants, followed by six percent in Germany and four percent each in Russia and Saudi Arabia.

Most Americans are dis-satisfied with US policies that permit large numbers of unauthorized foreigners to enter and remain the country. Almost half say that large-scale illegal immigration is a critical threat.

⅓ of Americans want to maintain, increase, and decrease immigration

Immigration. Immigrants arrived in the US in four major waves that were influenced by events abroad and US policies. The first wave arrived before newcomers began to be recorded in 1820 and involved mostly migrants from Britain, giving the colonies and eventually the US English and common law. The second immigration wave was dominated by Irish and German Catholics in the 1840s and 1850s, and led to a Know Nothing restrictionist movement that may have led to policies to reduce Catholic immigration if the Civil War had not reduced immigration in the 1860s.

Immigrants arrived in 4 major waves; numbers and origins changed after 1965 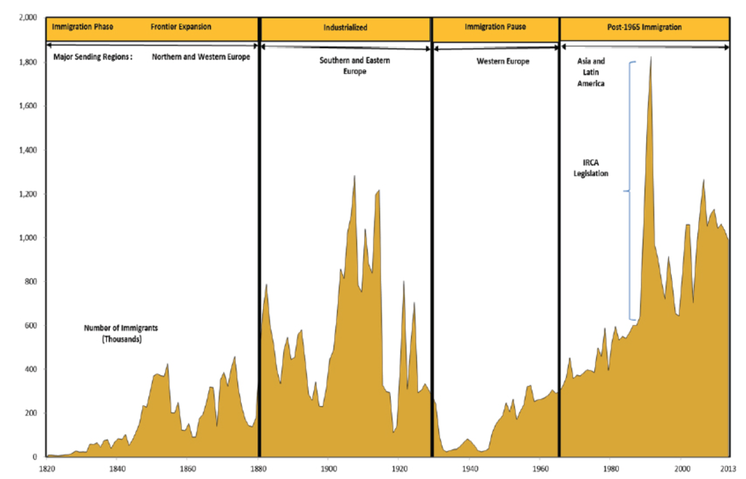 The third immigration wave witnessed the arrival of large numbers of southern and eastern Europeans, many of whom passed through Ellis Island in New York harbor. WWI stopped the third wave, and legislation in the 1920s tried to preserve the composition of the US population before the third wave arrived by setting national origin quotas for each country based on pre-third-wave US residents, so that Western European countries had the largest quotas.

The 1950s economic miracles in postwar Europe reduced immigration from European nations, and national origins quotas made it hard for Asians and Latin Americans to immigrate. In 1965, the US shifted from national origin to family unification as the major priority for allocating visas, allowing settled immigrants and US citizens to sponsor their relatives. Predictions that immigration patterns would not change proved to be wrong, and immigrants from Asia and Latin America replaced European immigrants. 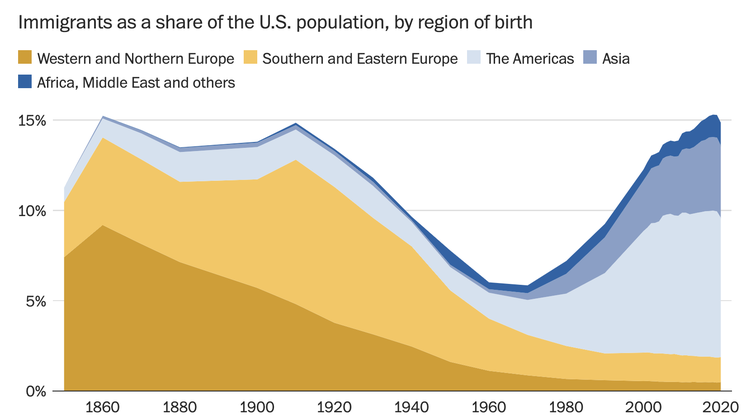 Almost 80 million immigrants have been admitted since record-keeping began in 1820, including a quarter since 2000. Immigration averages 1.1 million a year, including half who are admitted because they are spouses, children and parents of US citizens, a quarter admitted because they are relatives of settled immigrants or US citizens, and a quarter admitted for employment and humanitarian reasons. Most immigrants are already in the US when they are admitted, meaning that they have a student or work visa or another status.

Legal immigration raises several questions, including how many, from where, and in what status newcomers arrive. The US responses have been an unlimited number of immigrant visas for immediate relatives of US citizens, to favor the immigration of foreigners with US relatives, and to allow foreigners already in the US to become immigrants. The result is that a foreigner who arrives as a student can become an immigrant by marrying a US citizen or being sponsored for an immigrant visa by a US employer. After becoming a naturalized US citizen, this student-immigrant-citizen can sponsor his or her relatives for immigrant visas. The US family unification system allows some migration to beget more migration, as settled immigrants become anchors for a chain of more family-unification immigrants.

Many economists urge the US follow Australia and Canada and use a point system to select those foreigners most likely to have high US incomes for immigrant visas. Prioritizing youth, education, and US job offers could help the US to select immigrants who would quickly find jobs and could spur economic growth. Some proponents of the current family unification system support a points-based selection system, but not if more employment-based visas means less family-based immigration.

Unauthorized. Illegal immigration became an issue in the 1970s, when the United Farm Workers union complained that unauthorized Mexicans entered the US and went to work on farms where the UFW was on strike, undercutting US farm workers who sought higher wages. The House approved legislation to sanction or fine employers who knowingly hired unauthorized workers, but southern Democrats who were protecting farm employers blocked action in the Senate. 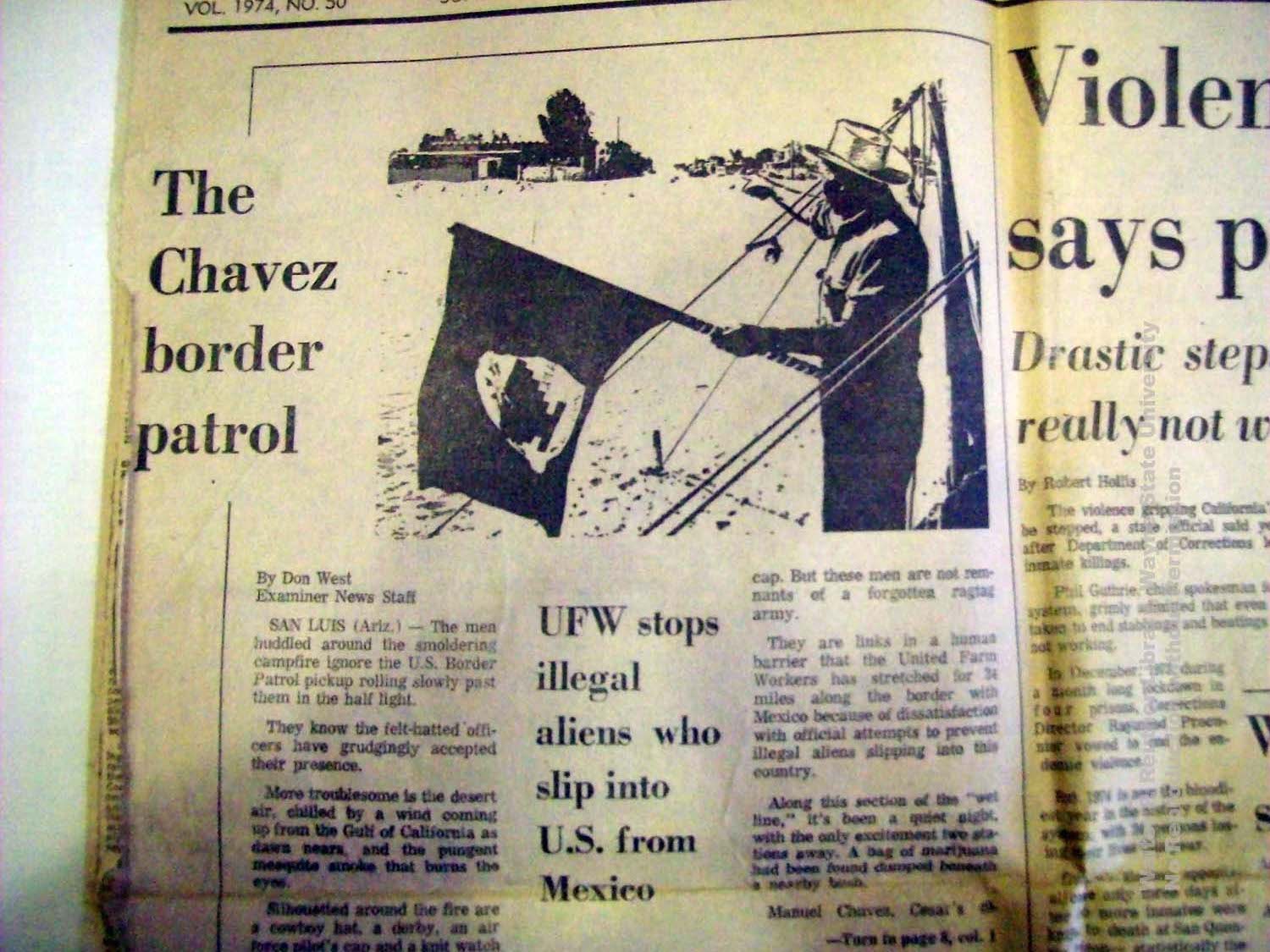 A Select Commission outlined an immigration compromise in the early 1980s that offered legalization to unauthorized foreigners who had developed US roots and introduced sanctions on employers who hired unauthorized workers. This grand bargain was incorporated into the Immigration Reform and Control Act of 1986, which had two legalization programs, one based on being in the US since 1982 and another based on doing farm work for at least 90 days in 1985-86.

IRCA’s legalization programs allowed 2.7 million unauthorized foreigners, 85 percent Mexicans and 40 percent farm workers, to become immigrants and eventually US citizens. At least half of the 1.1 million foreigners legalized under the SAW agricultural program used fraudulent documents to get immigrant visas, and the fraudulent documents industry expanded to provide documents to newly arrived unauthorized foreigners. Legal and unauthorized Mexicans spread from farms in the southwest to all industries and states in the 1990s.

Legalization succeeded too well, while employer sanctions failed. Opposition to Big Brother meant that IRCA did not include a counterfeit-resistant Social Security card or work permit. Workers had to present work authorization documents when hired, but employers did not have to verify these worker-presented documents, so the unauthorized foreigners who arrived in the 1990s continued to be hired with the only risk to the employer of losing employees in the event of enforcement.

The number of foreigners arrested just inside the US rose to a record 1.6 million in FY00, which meant an average 4,500 arrests per day or almost 200 an hour. Apprehensions fell in the 21^(st) century, especially during and after the 2008-09 recession, and remained low during covid before rebounding to an all-time high of 1.7 million in FY21, when at least a quarter of the foreigners encountered had been caught at least once before. Since FY20, DHS combines expulsions and apprehensions in a measure called encounters.

Encounters just inside the US peaked at 1.7 million in FY21 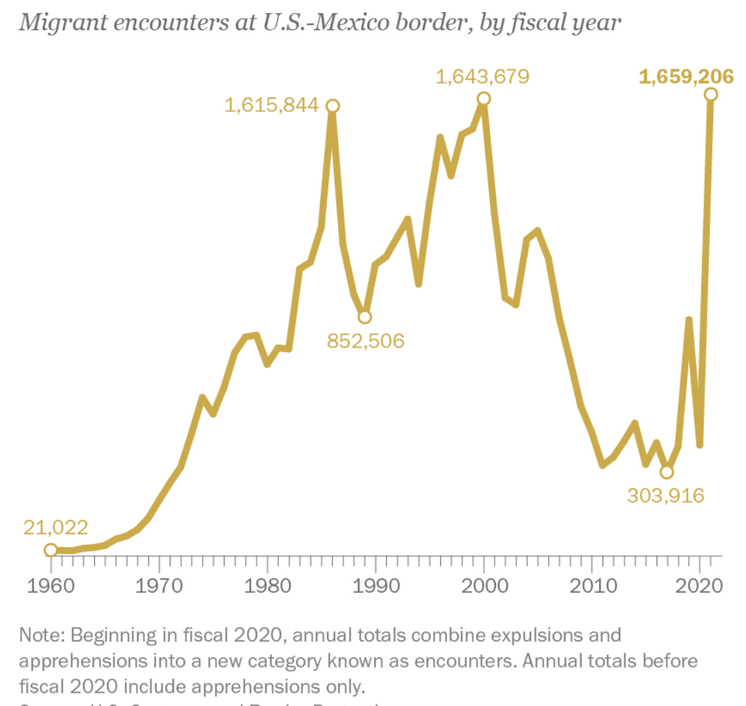 Until 2010, most of the migrants apprehended or encountered just inside the Mexico-US border were Mexicans. However, the number of citizens of Northern Triangle countries, Honduras, Guatemala and El Salvador, began to rise in 2014-15, and over 40 percent of encounters in FY21 involved Central Americans. There was also a jump in the number of Ecuadorans, Brazilians, Nicaraguans, Venezuelans, and Haitians encountered in FY21.

In FY00, almost all apprehensions involved Mexicans; in FY21, 36% were Mexicans 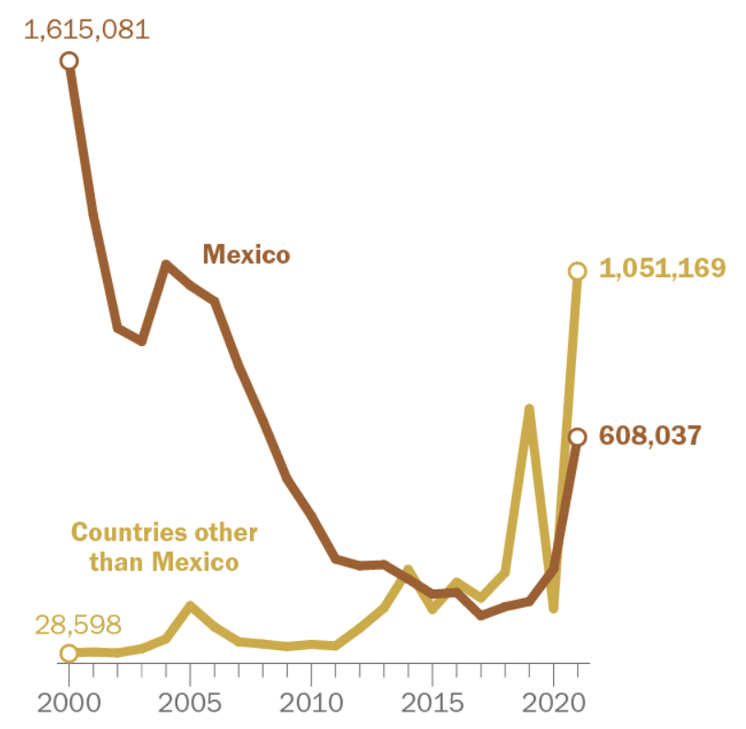 Most border encounters involve solo adults, almost two-thirds in FY21, and most solo adults are returned immediately to Mexico. However, the US often admits families with children and solo children under 18 who arrive enter the US illegally, which encourages more family units and unaccompanied children to enter the US. 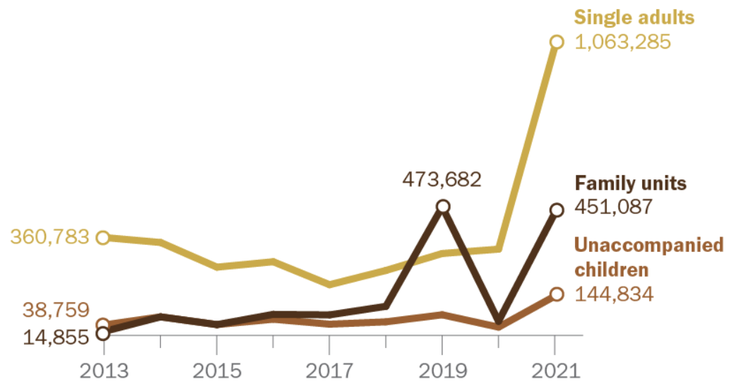 The US border with Mexico is divided into nine sectors from the Rio Grande in the east to San Diego in the west. Most migrant encounters occur in Texas, led by over a third in the Rio Grande sector. 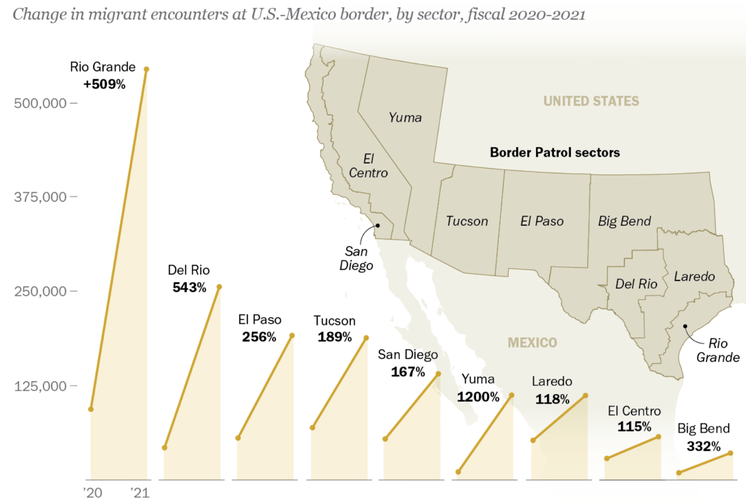 Most foreigners rely on smugglers to migrate illegally to the US, with relatives already in the US often providing the funds to pay smugglers. Smuggling costs, as estimated by CBP and interviews with migrants, increased sharply since 2000, from less than $1,500 to over $5,000 per person.

Smuggling costs are over $5,000 per person 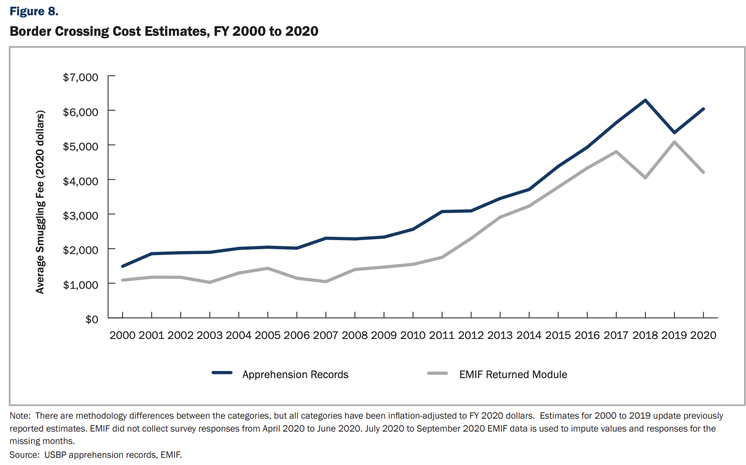 Some smugglers tell journalists that half of the cost sneaking migrants into the US are tolls paid to Mexican drug cartels. In order to maximize profits, smugglers may attempt to pack 100 or more migrants into tractor trailer trucks that are cloned to resemble Fed Ex, UPS, or similar trucks of well-known firms in order to avoid inspections at the CBP checkpoints that are an hour or more north of the border. 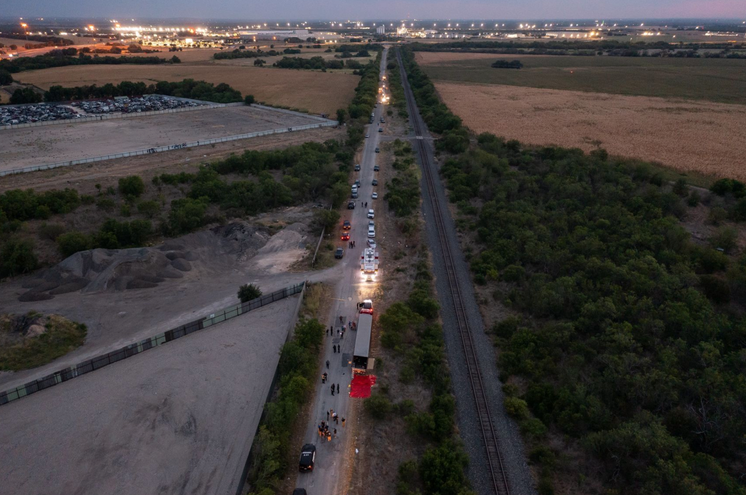 Title 42 of the Public Health Act was invoked in March 2020 to allow DHS to expel foreigners to prevent the spread of disease. For most of 2020, over 90 percent of the foreigners encountered by border agents were expelled. The expulsion rate fell in 2021, when half of unauthorized foreigners were paroled into the US. 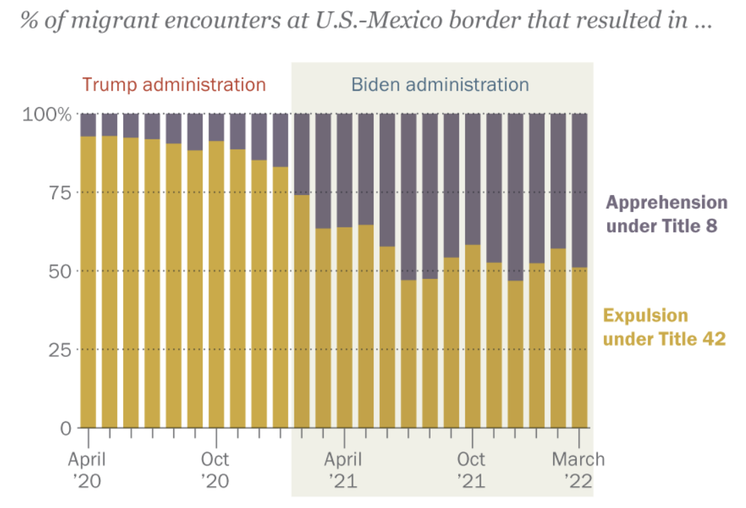 Almost 80 million immigrants have been admitted since 1820