How well do immigrants and their children integrate into the US economy and society? During the third wave of immigration before WWI, when a million immigrants a year arrived in the US from southern and eastern Europe, there were fears that Italians, Jews, Poles and others would not become Americans. The arrival of rural Mexicans and Central Americans raises similar fears today.

Most immigrant integration is inter-generational, meaning that a migrant who arrives in the US with a ninth grade education may be better off than he or she would have been by remaining at home, but is unlikely to climb the US job ladder; rags to riches transitions have been and remain unusual. However, the children of low-income immigrants who are educated in the US often climb higher than the children of US-born parents with similar low incomes.

Mobility. Boustan and Abramitzky’s eight chapter book is based on the analysis of census records to determine how sons with at least one immigrant parent whose income was at the 25th percentile of US income fared in the US. This means that Boustan and Abramitzky compared the progress of boys who had (1) immigrant and (2) US-born parents whose incomes were higher than 25 percent of all US residents and lower than 75 percent of all US residents.

Boustan and Abramizky attribute the extra upward mobility of immigrant sons to geographic mobility. Immigrant parents moved to US cities that needed workers to staff factories, and their children benefitted from the economic growth associated with manufacturing and urbanization. Boustan and Abramizky estimates of the incomes of fathers and sons is approximate because they estimated incomes based on the jobs or occupations recorded for each person in successive censuses. 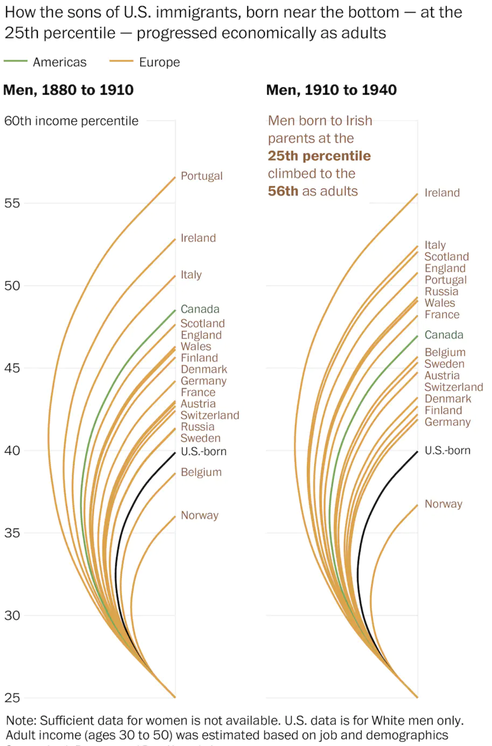 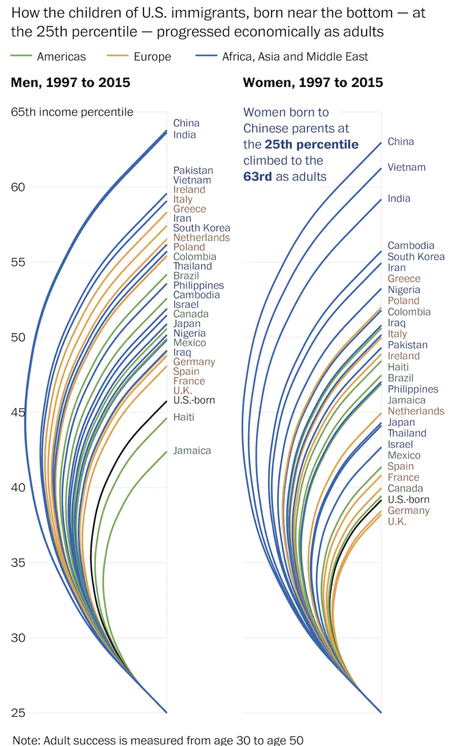 A third of sons born between 1978 and 1983 to at least one immigrant parent whose income was at the 25th income percentile had incomes in the top two groups, while only a quarter of sons born to US parents moved to the top two income groups.

⅓ of the sons of poor immigrants, and ¼ of the sons with poor US-born parents, moved into the upper two income groups

History. Boustan and Abramitzky conclude that “children of poor immigrants from nearly every country in the world make it to the middle of the income distribution.” Their method is to identify immigrants in one census, such as the 1880 census that included mostly immigrants born in western Europe, and see how the children of these immigrants were faring 30 years later in the 1910 census. The census did not collect income data until 1940, so Boustan and Abramitzky estimated the incomes of immigrants and their sons based on their occupations, ages, and place of residence.

Many 3rd wave immigrants had exaggerated visions of US opportunities

The generally optimistic story of immigrant integration painted by Boustan and Abramitzky has several caveats. The analysis is based on a particular type of immigrant, those at the 25th percentile of income who have children and are enumerated in the census. The median individual income in 2021 was $44,225, and the 25th percentile income was $23,350. Those at the 25th percentile are diverse, including adults with little education whose incomes may not rise significantly and students who may be working part time while completing degrees but who can expect higher incomes in the future.

The Americanization movement promoted the speaking of English and the abandonment of “old ways,” such as the sharp reduction in German-language publications during and after WWI. Over 30 states enacted laws that required or encouraged churches and schools to offer English and civics classes in the evenings and on weekends for recent immigrants; many employers and unions cooperated to ensure that immigrants became Americans. Immigrants who intended to return to their countries of origin with savings realized that they could not due to WWI devastation and the redrawing of national borders in Europe, giving them an incentive to become Americans.

Boustan and Abramitzky emphasize that many of today’s most successful US immigrants had privileged backgrounds and successful and professional parents, such as the parents of Google’s Sergey Brin who were a professor of mathematics and a NASA scientist. Their major conclusion is that moving to higher-wage areas benefits immigrants and especially their US-educated children. Immigrant parents with little education may not climb far up the US economic ladder, but some of their US-educated children achieve upward income mobility.

Perspective. Most reviews of Boustan and Abramitzky are positive, citing their innovative use of data mining to link millions of census records to paint a data-based picture of immigrant integration.

Boustan and Abramitzky try to deal with other immigration debates, including how the arrival of low-skilled immigrants affects similar US-born residents. They cite the April 1980 Mariel boatlift of 125,000 migrants, many of whom settled in Miami, increasing the labor force by seven percent.

What happened to US workers in Miami? There was a recession in the early 1980s, and the unemployment rate of Hispanic workers in Miami rose by 1.5 percent, but the rate rose by even more, by three percent, in cities such as Atlanta that did not receive many Marielitos. The conclusion that even a large increase in the supply of low-skilled labor via immigration did not harm similar Americans was controversial, defying the economist’s standard negatively sloped demand for labor. The explanations for the unusual Miami result range from data issues to US workers moving away from Miami to slower labor-saving automation in Miami because low-skilled workers were available.

Boustan and Abramitzky also deal with the Bracero program, which admitted about 4.5 million Mexicans to fill seasonal farm jobs between 1942 and 1964, most of whom worked on farms that produced cotton and sugar beets. The Bracero program was abolished as a form of civil rights for Hispanics, with the NYT opining that farm wages would rise if “large growers … can no longer count on limitless cheap labor from Mexico.”

The Boustan and Abramitzky discussion of Braceros is misleading. They cite a study that compared wage growth in states with more and fewer Braceros to conclude that ending the Bracero program did not result in faster wage growth in more Bracero-dependent states such as California.

However, the employment of Braceros was concentrated by geography, commodity, and size of employer within states. In California, large farms producing citrus, strawberries, leafy greens and processing tomatoes were more dependent on Braceros than smaller farms producing table grapes, tree fruit, and melons. Such differences make it hard to measure the wage effects of Braceros at the statewide level.

Between 1 and 2 million Mexicans participated in the Bracero program 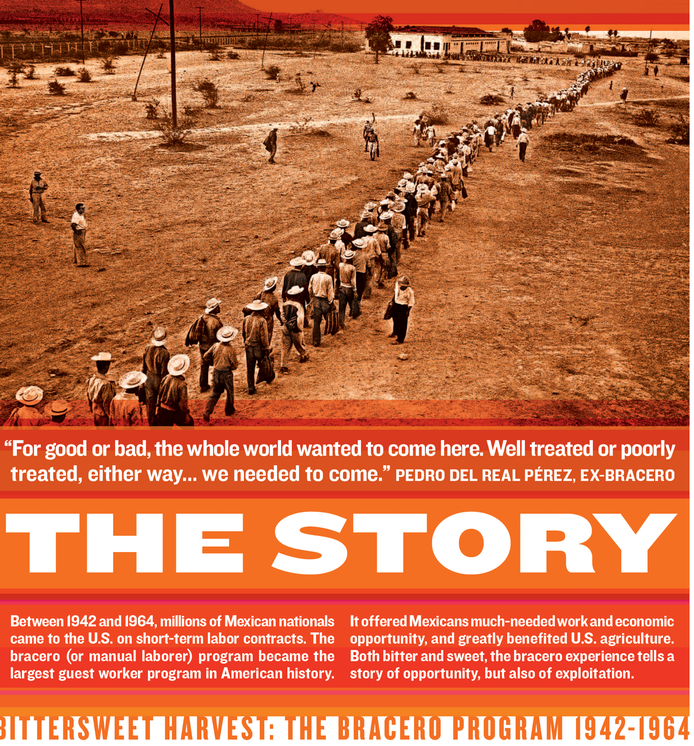 Boustan and Abramitzky argue that ending the Bracero program contributed to bland American food during the 1960s and 1970s, and that the expansion of the H-2A program after 2000 increased the popularity of avocados, micro greens, and organic berries. This is wrong. The H-2A program mostly brought Jamaican workers to the US to cut sugar cane in Florida and to pick apples on the eastern seaboard until the mid-1990s, when the locus of the program shifted to North Carolina tobacco and later vegetable fields. Over 80 percent of US fresh avocados, and a rising share of organic berries, are imported from Mexico, so that trade rather than low wages due to H-2A workers may induce changing consumer preferences for these commodities.

Boustan and Abramitzky argue against point selection systems: “we can continue to accept immigrants from poor countries at similar levels to today, even immigrants who arrive without many years of schooling, with the confidence that the American economy will allow their children to rise.” They conclude that “policies designed to deter less-educated immigrants from entering the United States are misguided…even if some immigrant parents live below the poverty line and receive some government assistance, one generation later their children more than pay for their parents’ debts.”

Boustan and Abramitzky do not grapple with the longer run effects of less US worker mobility or slower automation that may reduce productivity growth.

Another study using data from the Annual Social and Economic Supplement to the Current Population Survey collected in March 2021 found that US-born children with immigrant parents who are now 25 to 29 years old have mostly achieved the same socio-economic status as US-born children with US-born parents. US-born Hispanic young adults with immigrant parents had a lower socio-economic status than other second-generation Americans. 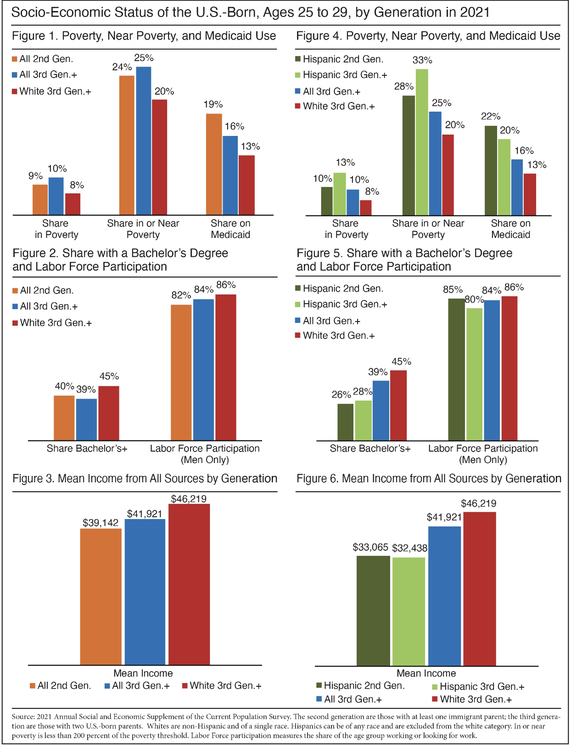 Camarota, Steven. 2022. The Second Generation: Glass Half Empty or Half Full? CIS. 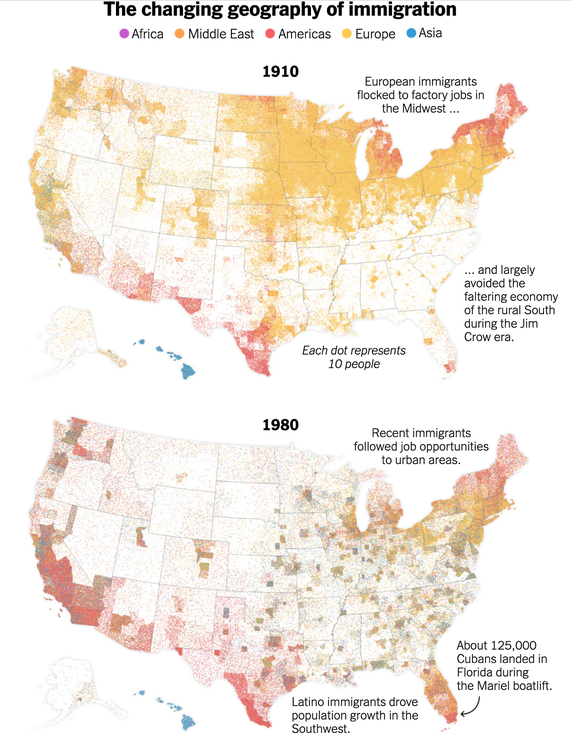