Some 16 million workers in forced labor were employed by private employers in domestic work, construction, agriculture and other sectors. Over half of those in forced labor in the private sector owed money to their employers, often reflecting pay advances or debt bondage that require work to repay debts to employers.

⅔ of forced labor victims were in domestic work, construction, manufacturing and ag 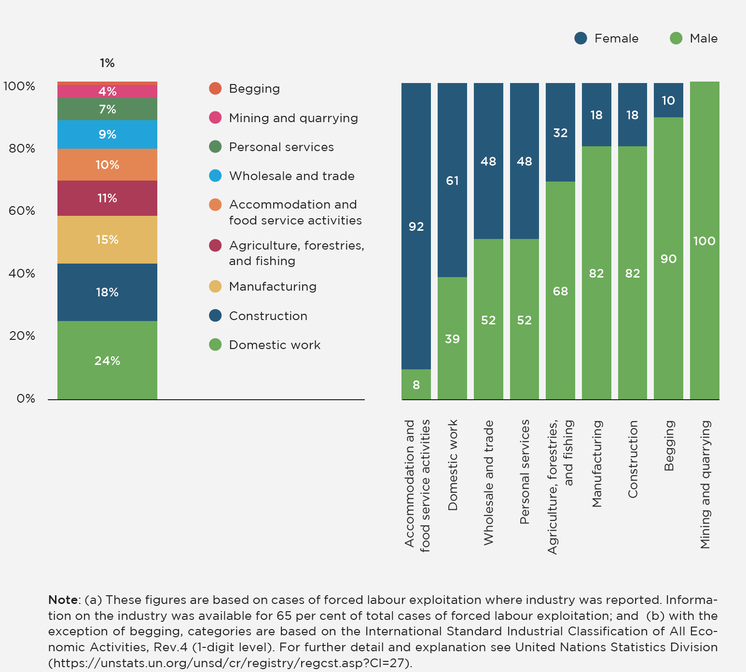 US. NGO Polaris operates a National Human Trafficking Hotline that solicits calls from potential victims of trafficking in the US. Polaris reported almost 16,000 calls involving persons who could be trafficking victims between 2018 and 2020, an average of 445 calls a month. A quarter of the potential victims, 3,900, were foreigners with temporary work visas. 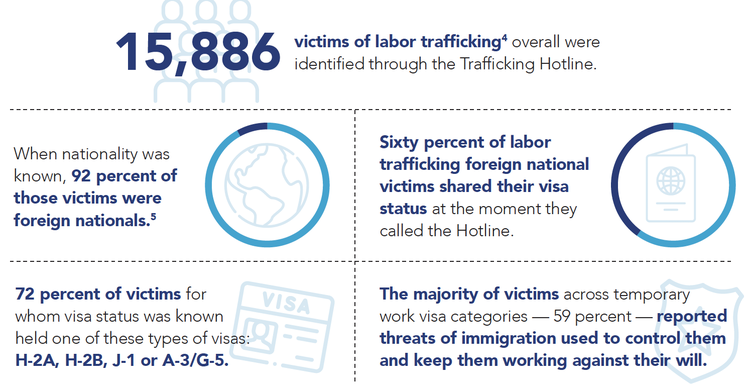 Among the 3,900 potential victims for whom visa status was known, 2,800 or 70 percent held the H-2A visas issued to foreigners who fill seasonal jobs in US agriculture.

Forced labor is defined as controlling another person via force, fraud, and coercion. The most common coercive tactic was to threaten guest workers with being fired, which means losing the right to work legally in the US, or being blacklisted and not invited to return next year as a seasonal guest worker. Almost 60 percent of those with H-2A visas who may have been trafficking victims reported that they were required to work excessive hours (not defined), and 40 percent reported that their employer withheld some of their wages (also not defined).

Most potential trafficking victims were threatened with firing or blacklisting

Reports to hotlines can include multiple indicators of forced labor, and many callers reported several factors in each category, such as coercion via threats to fire or blacklist complaining employees, fraud by requiring excessive work hours or withholding wages, and force by limiting access to medical care. Calls to hotlines can be from potential trafficking victims or others who provide information on victims.

Force, fraud, and coercion are indicators of trafficking

H-2A guest workers are available to US farmers who satisfy two major criteria, (1) they try and fail to recruit US workers to fill vacant jobs and (2) they ensure that the presence of guest workers does not adversely affect similar US farm workers by paying an Adverse Effect Wage Rate. Over 95 percent of employer requests for certification to hire H-2A are approved. One item highlighted by calls to the Polaris hotline is that some of the workers who may be trafficking victims were employed in nonfarm rather than farm jobs.

Over 10% of suspected H-2A trafficking victims had nonfarm jobs 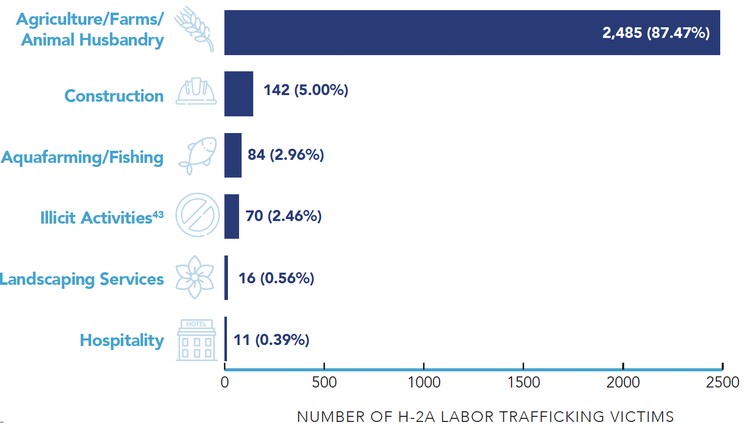 Many advocates want visa portability, which means that H-2A and other guest workers could leave abusive US employers and remain legally entitled to work in the US. Visa portability is complicated because the purpose of the H-2A and H-2B programs is to fill seasonal US jobs that cannot be filled by US workers.

If an H-2A visa holder left an abusive employer who had paid for his transportation to the US, could the abused H-2A worker be employed by any US employer or only another employer who has been certified to hire H-2A workers? Would the second employer have to repay some or all of the transportation costs that were paid by the first employer to bring the worker to the US? Who would decide if the first employer was abusive enough to allow the guest worker to switch employers?

Countries that allow abused guest workers to switch employers such as Korea find that very workers change employers. There are many reasons, including the fact that there are two sides to most employment-related disputes; when mis-understandings are clarified, the potential abuse may fade away. Having a trusted neutral arbiter to deal with workplace issues may be a faster and most flexible way to resolve workplace issues.

Perspective. One trafficked worker is one too many. However, there are few reliable statistical analyses of trafficking because of a lack of data. Calls to hotlines generate data, but they can be from workers or others who report the experiences of workers. The information provided to hotlines is categorized but not verified.

There were over 600,000 H-2A visas issued in FY18, FY19 and FY20. Over 80 percent of H-2A visa holders worked in the US previously, suggesting that perhaps 250,000 unique individuals received H-2A visas during these years. This makes the 2,800 suspected H-2A trafficking victims who called the Polaris hotline about one percent of all H-2A visa recipients.

The question is whether Polaris hotline reports are the tip of a forced labor iceberg or isolated incidents. There is general agreement on several facts. First, the 10x difference in wages between US wages and wages in worker-origin countries means that the supply of guest workers abroad exceeds the US demand for them. Second, recruitment in worker origin countries often involves loosely regulated intermediaries who may charge workers for access to US jobs.

Third, some of the 10,000 US employers who make 16,000 applications for H-2A workers each year have business models that depend on taking advantage of guest workers. Some of these problem employers are labor contractors who know that some H-2A workers are desperate for high-wage US jobs and take advantage of them.

DOL, DHS, and other agencies, as well as NGOs that seek to protect farm workers, lack the resources to enforce H-2A regulations at each of these 10,000 employers who employ 250,000 H-2A workers. However, instead of the visa portability desired by worker advocates, a better strategy may be to reward good employers so that their share of the guest worker labor market expands.

The largest 500 H-2A employers each employ more than 100 H-2A workers and collectively account for two-thirds of all H-2A job certifications, including 25 H-2A employers who have 1,000 or more H-2A workers. Developing a three-tiered system analogous to airline security screening, with (1) precheck or self-certification for large employers with HR departments and a track record of compliance with regulations, (2) the current system for other employers, and (3) a do-not-fly or debarred list for those who have violated regulations, could do more to protect most guest workers than visa portability.

The concentration of farm employment by geography, commodity, and size mean that the largest 5,000 US farm employers, who are between one and five percent of all farm employers according to UI (100,000 ag employers) and COA (500,000 ag employers) data, respectively, account for two-thirds of US hired worker employment. Some of the difference between the UI and COA employer counts reflects family farms that transfer farm profits to family members to reduce income taxes and the exemption of small employers from UI in some states.

Agriculture is evolving into a system of large and small farms. Public policy has grappled for decades with how to deal with middle-sized farms that are too large to rely on off-farm work or retirement income to support farm families, but not large enough to achieve the economies of scale in farm production that characterize large farms.

The expansion of the H-2A program is highlighting this middle-size dilemma. Employers make 18 attestations or assurances when they apply for certification to employ H-2A workers, and many employers do not understand or implement all of them. When some of the guest worker employees of a labor contractor with 20 to 30 H-2A workers say that they worked 70 to 80 hours a week and were paid for 48 hours a week, but the employer has no records and the other H-2A workers who want to keep their jobs agree with the employer that the work week is 48 hours, whose story is most credible?

Appendix. ILO estimates of forced labor are based on “reported cases” of forced labor that include the event, number of victims, place, and time. The methodology is capture-recapture, which involves comparing the number of cases of forced labor in two samples of NGO, government, and media reports and determining how many cases are in both. Capture-recapture rests on four critical assumptions: (1) there was no change in the universe over the period studied, (2) victims were identified correctly, (3) the probability of case selection was equal in the two samples, and (4) the samples were drawn independently.

Academic studies suggest that ILO and NGO estimates of forced labor victims may be exaggerated. Groups seeking funds to combat trafficking have incentives to exaggerate the number of victims. It is often hard to draw the line between labor exploitation and trafficking in industries such as agriculture, especially if housing workers in employer-owned camps that workers leave with employer-provided transportation is considered indicators of trafficking