The H-2A program allows US employers who anticipate labor shortages to be certified by the US Department of Labor (DOL) to employ guest workers (1) if they try and fail to recruit US workers and (2) if the employment of H-2A workers does not adversely affect US workers. The recruitment test involves farmers posting their jobs and failing to attract US workers, and the adverse effect test requires employers to pay an Adverse Effect Wage Rate that is typically higher than federal, state, and local minimum wages.

DOL certified about 9,000 farm employers to fill over 10 percent of the average employment of 1.1 million on US crop farms in FY20 with 220,000 H-2A workers who were in the US an average six months. At its peak in the mid-1950s, the Bracero program admitted about 455,000 Mexican workers, and they were 20 percent of US seasonal farm workers.

US farm employment is concentrated by area, commodity and size of farm, so that large farms producing fresh fruits and vegetables in CA, WA, FL and a few other states account for over half of US farm worker employment and wages. H-2A employment is similar and different. Two-thirds of H-2A guest workers are employed on fruit and vegetable farms, but many are brought to farms by labor contractors. CA, OR, and WA account for half of US farm employment, but only 20 percent of H-2A jobs certified.

Commodities such as apples and oranges are far more dependent on H-2A workers than peaches and table grapes. Most large farms hire both US and H-2A workers directly, while some smaller farms and farm labor contractors hire only H-2A workers.

Growth and Concentration. The major H-2A story is growth. The number of jobs certified to be filled by H-2A workers rose five fold between FY05 and FY20, and has continued to increase, likely topping 350,000 in FY22 or over 15 percent of average employment on US crop farms. The 280,000 H-2A workers in 2022 are in the US an average six months. 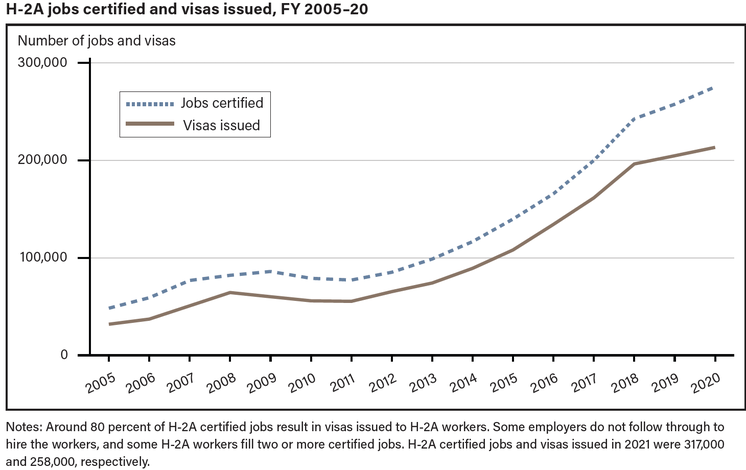 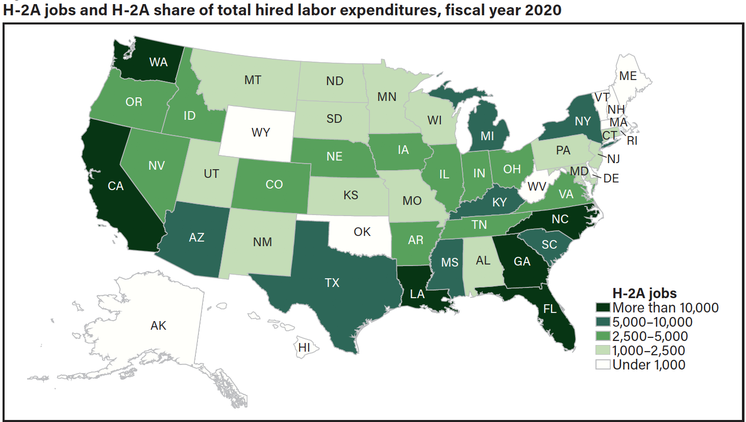 Only a quarter or 500,000 of the 2.1 million US farms have expenses for hired labor, and only five percent of US farms or 100,000 are enrolled in state unemployment insurance systems. Regardless of the measure of farm labor, a relative handful of farms account for most farm employment. Fewer than 10,000 US farms accounted for over half of COA labor expenses in 2017, and 1,600 of the US farms enrolled in UI in March 2020 accounted for a third of the 1.1 million US farm worker employment in that month. 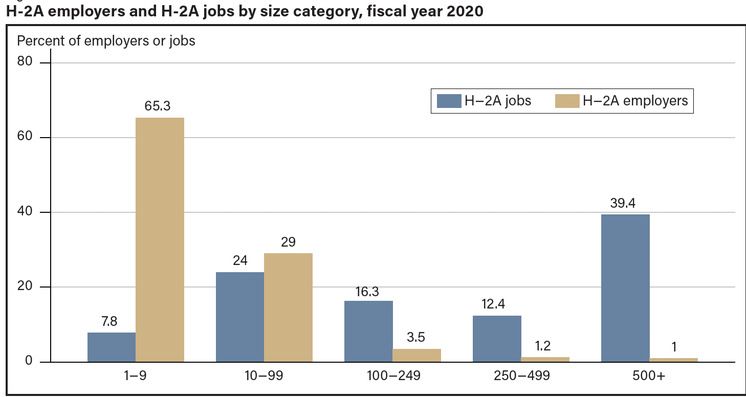 The ten largest H-2A employers in FY20 accounted for 14 percent of all H-2A certifications. These top 10 H-2A employers included two associations, two fixed-situs employers, and six FLCs. Foothill Packing, a FLC in the Salinas area that provides crews to harvest lettuce and other leafy greens, offered $15,000 contracts, while Rancho Nuevo Harvesting, a FLC that provides berry picking crews in the Santa Maria area, offered $8,700 contracts. When deciding on contract length, employers consider the likely duration of work in the commodity and area where they operate.

Piece rates from a 2022 certification for picking strawberries in Santa Maria, CA 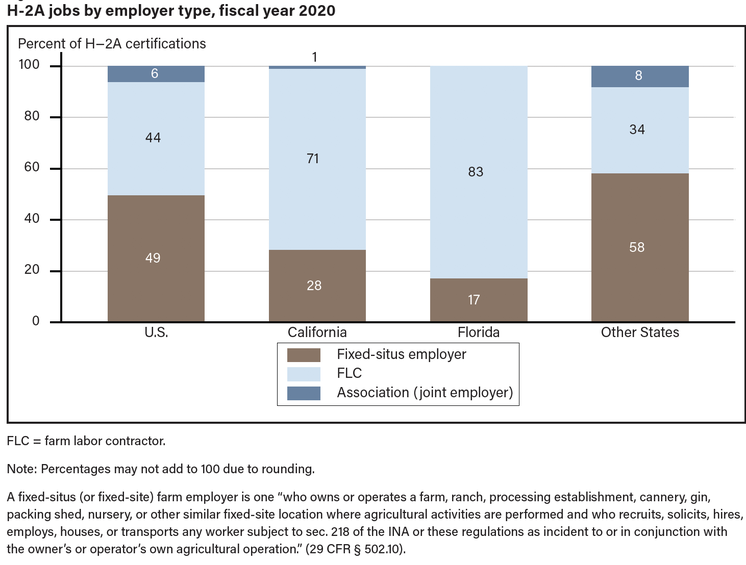 Farmers seeking certification to employ H-2A workers must describe the job, wages, and hours and weeks of work in contracts that are used to recruit US and H-2A workers. The contracts in FY20 offered 39 hours a week for 24 weeks, which generates about $12,500 at the average AEWR of $13.43 and a total wage bill for H-2A workers of $3.4 billion.

CA H-2A contracts offered significantly higher wages of $14,400 than FL contracts at $9,900 because CA contracts offered three more weeks of work and the AEWR was higher in CA. FL had one of the highest average jobs per certification, 67, much higher than the US average of 20.

H-2A jobs are concentrated within states. Florida leads in H-2A job certifications with 39,000 in FY20, and five counties in the south central part of the state accounted for over half of the H-2A jobs. 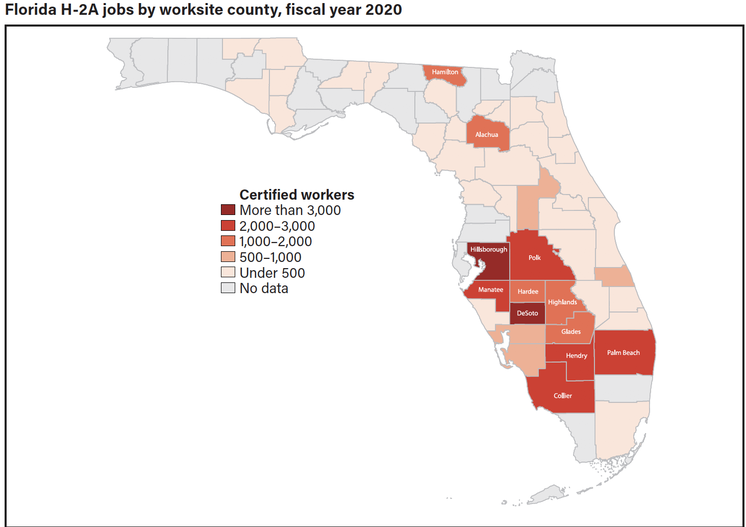 The five largest H-2A employers in Florida accounted for 20 percent of the H-2A jobs certified in the state. Three were FLCs, and they offered contracts that promised significantly higher total earnings than the two fixed-situs farms that hired H-2A workers directly.

The 3 largest H-2A employers in Florida are FLCs

California’s coastal counties that specialize in growing fresh vegetables and berries have the most H-2A jobs, even though the state’s leading farm counties by sales are in the San Joaquin Valley. 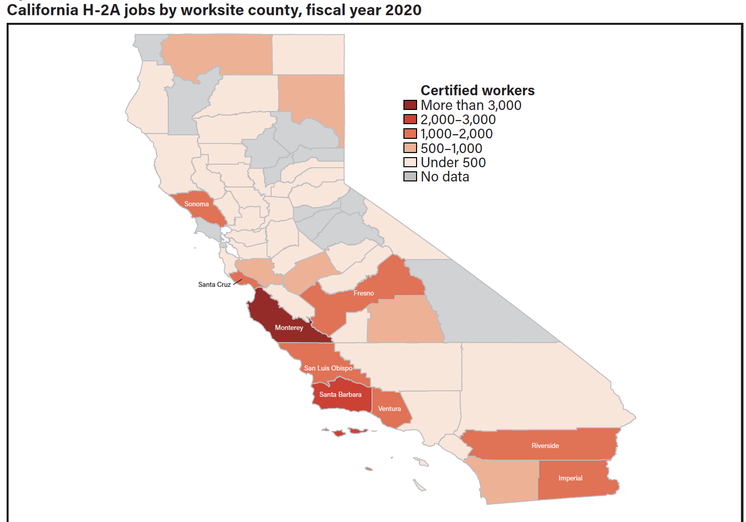 California’s leading H-2A employers are FLCs. The FLCs that provide crews to harvest vegetables in the Salinas area offer contracts that generate $15,000 to $18,000 in US earnings, while the H-2A workers who trim strawberry plants in far northern California are offered contracts that promise $6,000.

4 of the 5 largest CA H-2A employers are FLCs

The FWMA would allow unauthorized farm workers who did at least 180 days of farm work in the previous 24 months to apply for Certified Agricultural Worker (CAW) status. CAW workers could maintain their legal right to live and work in the US by doing at least 100 days of farm work a year and, after four or eight more years of farm work, could become immigrants. The spouses and children under 18 of CAW workers could also receive work and residence visas, would not have to do farm work to maintain their status, and could become immigrants with their farm worker sponsor.

The FWMA would modify the H-2A program by introducing three-year visas for H-2A workers so that they could remain in the US and work for multiple employers. The Adverse Effect Wage Rate would be frozen for a year, after which AEWR increases would be capped at 3.25 percent a year while USDA and DOL studied the impact and need for AEWRs until 2030.

How would freezing the hourly wage that must be paid to the 10 percent of US crop workers who are H-2A workers affect the wages of the 90 percent of US farm workers who are not H-2A workers? AEWRs rose by four percent a year over the past decade, with significant variation across states, so freezing the $3.5 billion H-2A wage bill would save employers about $140 million. The total AEWR wage savings would be larger because an estimated 50,000 US workers are employed on farms with H-2A workers and must receive the AEWR as well, so freezing the $717 million wages of US workers employed alongside H-2As would save $29 million, for a total of $169 million, similar to the $170 million estimate of DOL for the effects of an AEWR wage freeze.

The AEWR could also set a ceiling on hourly farm wages because a practically unlimited supply of H-2A workers is available at the AEWR. US workers who may be willing to work for a wage higher than the AEWR, but not for the AEWR, can be deemed unavailable to fill farm jobs.

AEWRs were introduced near the end of the Bracero program in the late 1950s after DOL concluded that the availability of Braceros had led to stagnation in US farm worker wages at a time when farm workers were not covered by minimum wage laws. The basis for AEWRs is the USDA Farm Labor Survey of about 12,000 farms conducted twice a year. About half of these farms respond, and they report the gross wages and total hours worked for various types of workers for the week that includes the 12^(th) of January, April, July, and October.

There is currently one AEWR per state for all farm workers. As the H-2A program expands, DOL and the FWMA propose to set AEWRs by job title rather than having one AEWR per state. The USDA survey would be the first choice to obtain a wage for the AEWR but, if it does not generate wage data for particular job titles, DOL would use the Occupational Employment Statistics (www.bls.gov/oes/home.htm) to generate an AEWR for a particular job. USDA surveys only farmers, while DOL surveys only nonfarm employers.

AEWRs are likely to become more contentious as average farm earnings rise and the H-2A program expands. USDA’s FLS adopted the gross weekly earnings divided by hours worked methodology in order to generate average hourly earnings for workers employed under a variety of wage systems, including hourly and piece rate systems. The OES provides more wage data, including mean and median hourly wages for particular job titles, but collects data only from nonfarm employers. Using only the USDA FLS survey to set AEWRs means excluding FLCs from the sample, but using only the OES means excluding farm employers who hire workers directly.