The data are collected in the Current Population Survey Annual Social and Economic Supplements in March for the preceding year, so these data were collected in March 2022.

Households headed by Asians had the highest incomes, while those headed by Blacks had the lowest 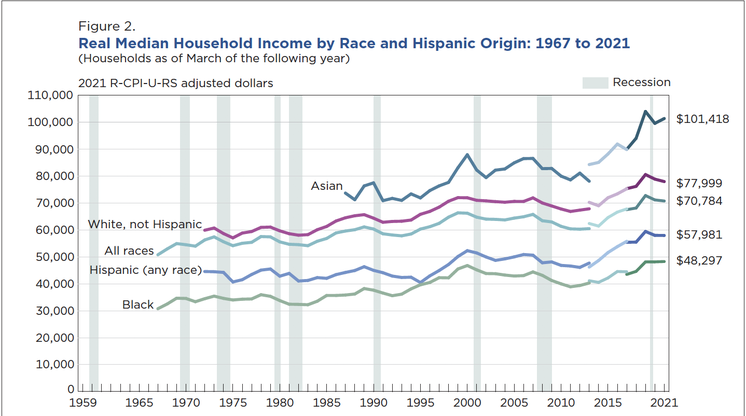 Households can also be ranked by their share of US income. The lowest-income quintile (the 20 percent of households with the lowest incomes), received about three percent of US income in 2021, while the highest quintile received 53 percent.

Income inequality rose slightly between 2020 and 2021

Poverty. Some 38 million people, about 11.6 percent of US residents, lived in households with incomes below the poverty line of $27,740 for a household of four. If taxes and government benefits are included, the poverty rate dropped from 12 percent to less than eight percent of all US residents and five percent for children.

Why have child poverty rates fallen so much since welfare reforms in 1996? Some 28 percent of US children lived in households with below poverty level incomes in 1993; by 2021, the rate dropped to 11 percent. Single mothers were able to find and hold jobs, states raised their minimum wages, and there was also a major expansion of non-cash aid, including child health care programs.