The US Bureau of Labor Statistics Consumer Expenditure Survey reported that there were 133.6 million US "consumer units" or households in 2021. They had an average of 2.5 persons, 1.3 earners and 1.9 motor vehicles; 63 percent were homeowners and the average age of the reference person in the household was 51.

Average consumer unit income before taxes was $87,400, and average annual expenditures were $66,900.

Household expenditures included $8,300 for food, 12 percent of total expenditures. Food spending was divided between food eaten at home, which accounted for 64 percent or $5,300 of food spending, an average of $100 a week, and $3,000 or $58 a week for food bought away from home. The cost of food away from home largely reflects convenience, service, atmosphere and other factors; food represents 35 percent of what is spent in cafeteria-style restaurants, 30 percent of spending in fast food restaurants, and 25 percent in fine dining restaurants. 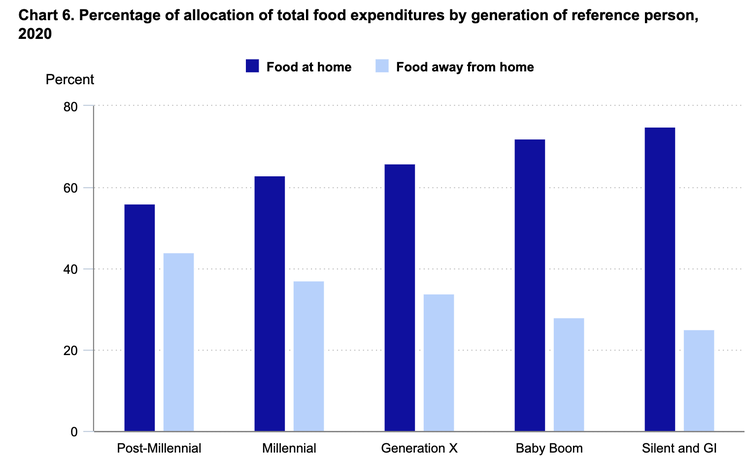 Housing and transportation accounted for half of consumer expenditures; food was 12% 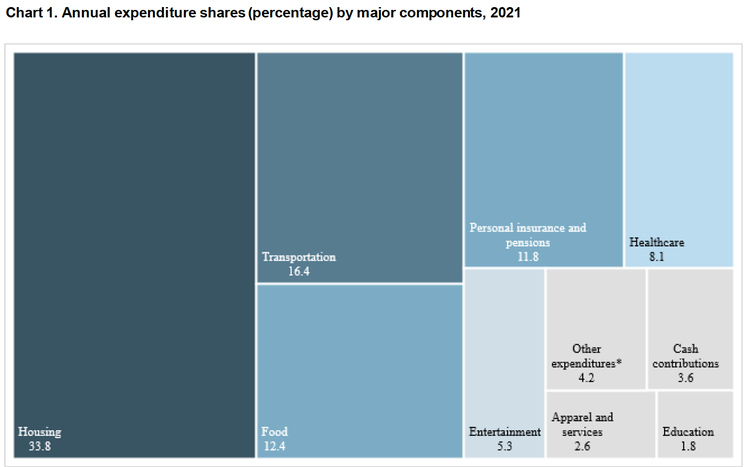 The largest food-at-home expenditures were for meat and poultry, an average of $1,115 per household in 2021. Expenditures on cereal and bakery products, $670, exceeded the $490 spent on dairy products.

Between 2020 and 2021, the price of meat rose fastest, followed by fresh fruit 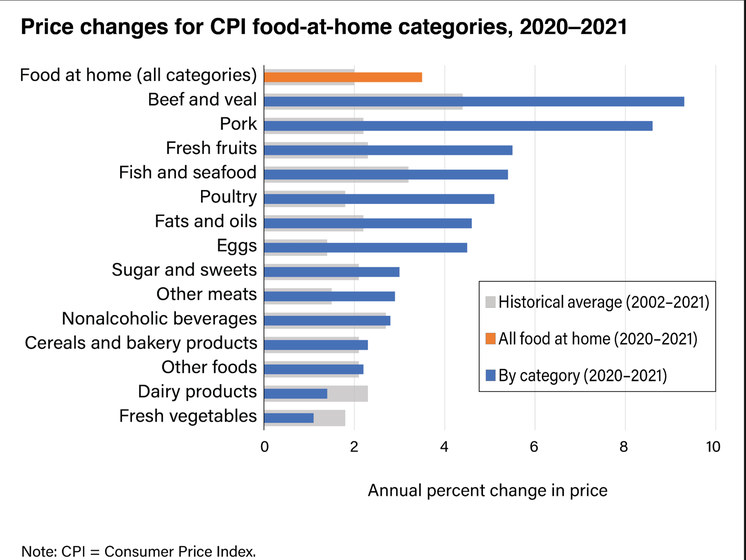 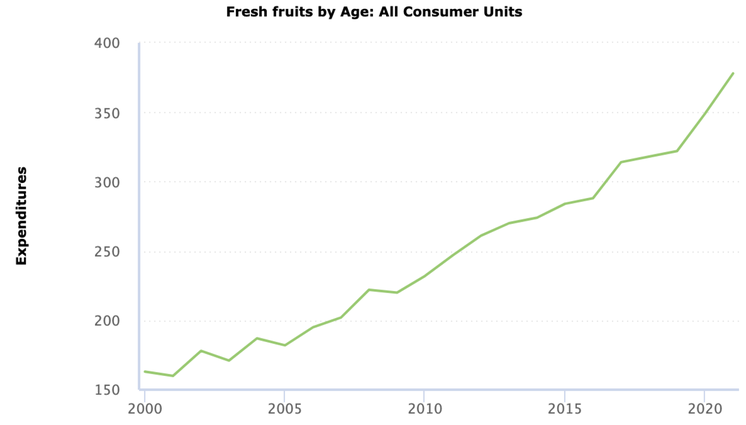 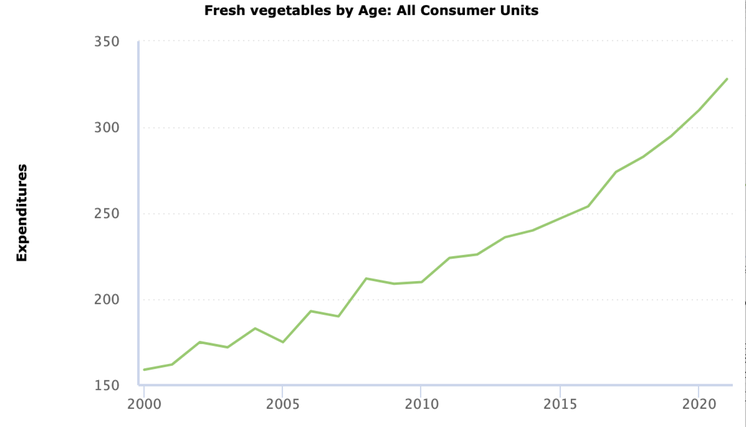 Income. Data on food spending by pre-tax income show that higher income consumer units spent more on fresh fruit than lower income households. Those earning $200,000 or more spent $700 on fresh fruit in 2021, almost three times more than the $245 spent by consumer units with less than $15,000 in pre-tax income. Similarly, incomes of $200,000 or more meant average spending of $575 on fresh vegetables, versus $210 for those with incomes of less than $15,000.

Higher income units spent more on fruits and vegetables, about three times more for those with incomes of $200,000 or more compared with households earning less than $30,000 in 2018. Spending on alcoholic beverages rose with income as well; households earning $200,000 or more were the only group to spend more on alcoholic beverages than on fruits and vegetables.

Higher income households spend more on food, but food spending was a smaller share of their income 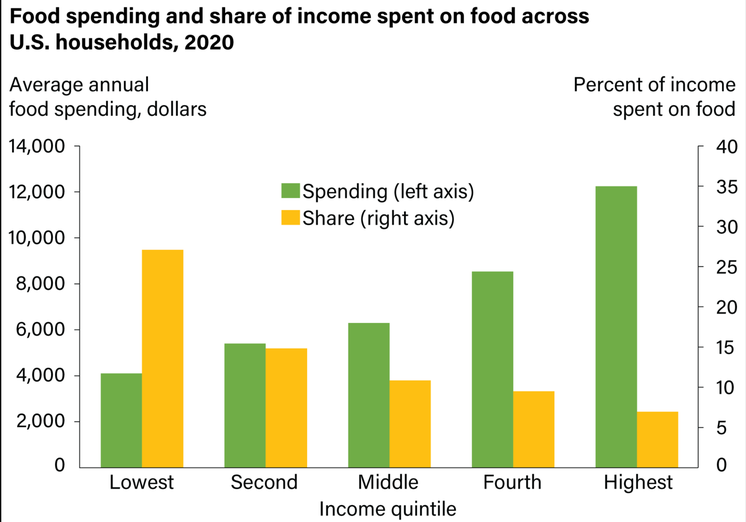 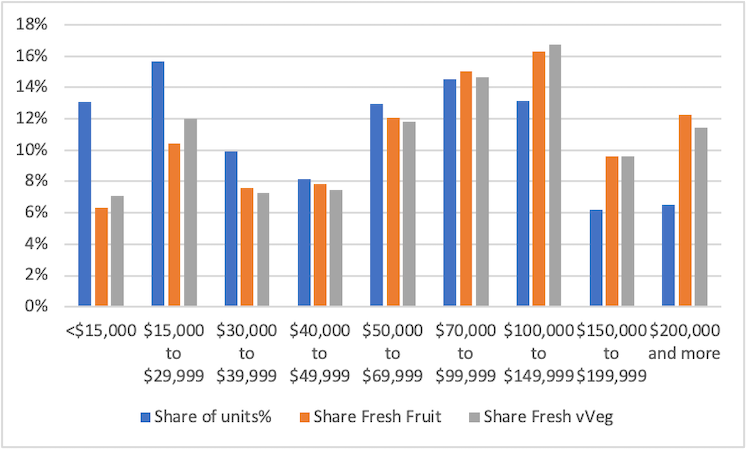 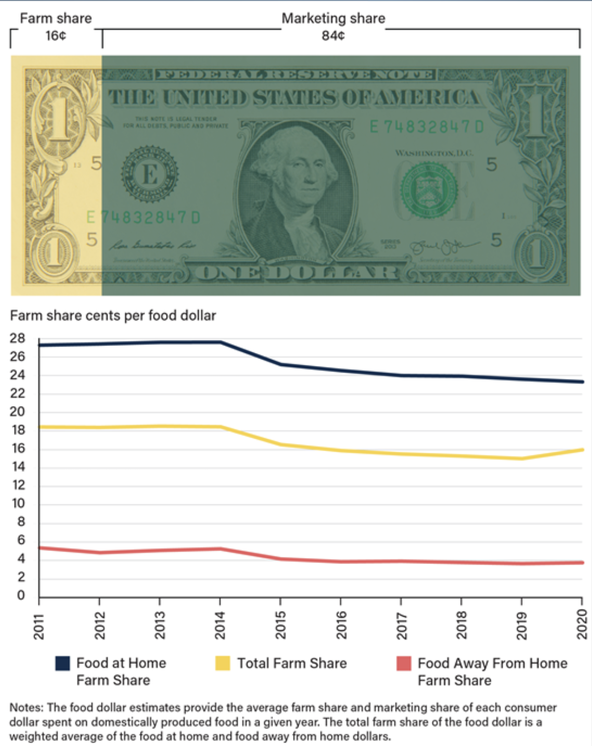 Farmers received 35% of consumer expenditures on fresh fruit in 2019

Farmers received 25% of consumer expenditures on fresh vegetables in 2020

Consumers who pay $2 for a pound of strawberries are paying about 70 cents to the farmer and 30 cents to farm workers. For $2 worth of fresh field-grown tomatoes, farmers receive 50 cents and workers 15 cents.

About half of the workers employed on US crop farms are unauthorized. These unauthorized crop workers are aging and settling, making them less mobile and flexible. Farmers are adjusting to fewer unauthorized newcomers by substituting machines for workers and supplementing the current workforce with legal H-2A guest workers.

What would happen to consumer expenditures on fresh fruits and vegetables if farm labor costs rose sharply? A natural experiment occurred after the Bracero program ended in 1964. Mexican Braceros were guaranteed a minimum wage of $1.40 an hour at a time when US farm workers were not covered by the minimum wage. Some table grape workers who were paid $1.40 an hour when they worked alongside Braceros in 1964 were offered $1.25 in 1965, prompting a strike. Cesar Chavez became the leader of the strike and won a 40 percent wage increase in the first UFW table grape contract in 1966, raising grape workers’ wages to $1.75 an hour.

What would happen to consumer expenditures if there were a similar 40 percent wage increase today? The average hourly earnings of US field and livestock workers were $15.56 an hour in 2021; a 40 percent increase would raise them to almost $22 an hour.

For a typical household or consumer unit, a 40 percent increase in farm labor costs translates into a four percent increase in the retail price of fresh fruits and vegetables (0.30 farm share of retail prices x 0.33 farm labor share of farm revenue = 10 percent; if farm labor costs rise 40 percent, retail spending rises 0.4 x 10 = 4 percent). If average farm worker earnings rose by 40 percent, and the increase were passed on to consumers, average spending on fresh fruits and vegetables for a typical household would rise by $28 a year (4 percent x $710 = $28.40). A 40 percent wage increase, on the other hand, would raise the average earnings of seasonal farm workers from $15,556 for 1,000 hours of work to $22,000.