A record 2.2 million unauthorized foreigners were encountered by Border Patrol agents just inside the US border with Mexico in FY22. Another 172,500 were detected at ports of entry, bringing total encounters to 2.4 million, up 37 percent from 1.7 million encounters in FY21.

Mexicans and Central Americans were 57 percent of those encountered. The number of Venezuelans, Cubans, and Nicaraguans who were encountered, over 571,000, exceeded the number encountered from El Salvador, Guatemala, and Honduras.

A record 2.4 million foreigners were encountered in FY22 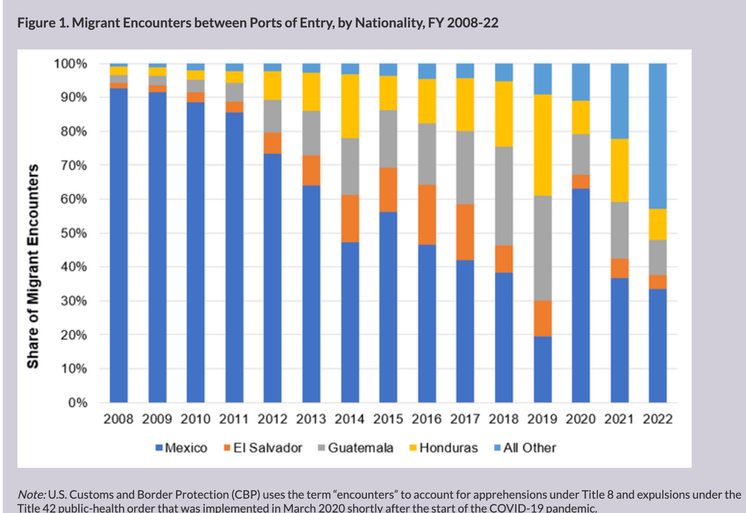 Countries. The number of Venezuelans, Cubans, and Nicaraguans encountered rose in in part because citizens of these countries cannot be deported to their countries of origin. Over 175,000 Cubans were encountered in FY22, more than the 125,000 who arrived during the Mariel boatlift of 1980.

Many migrants cross the Mexico-US border, turn themselves in to Border Patrol agents, and apply for asylum 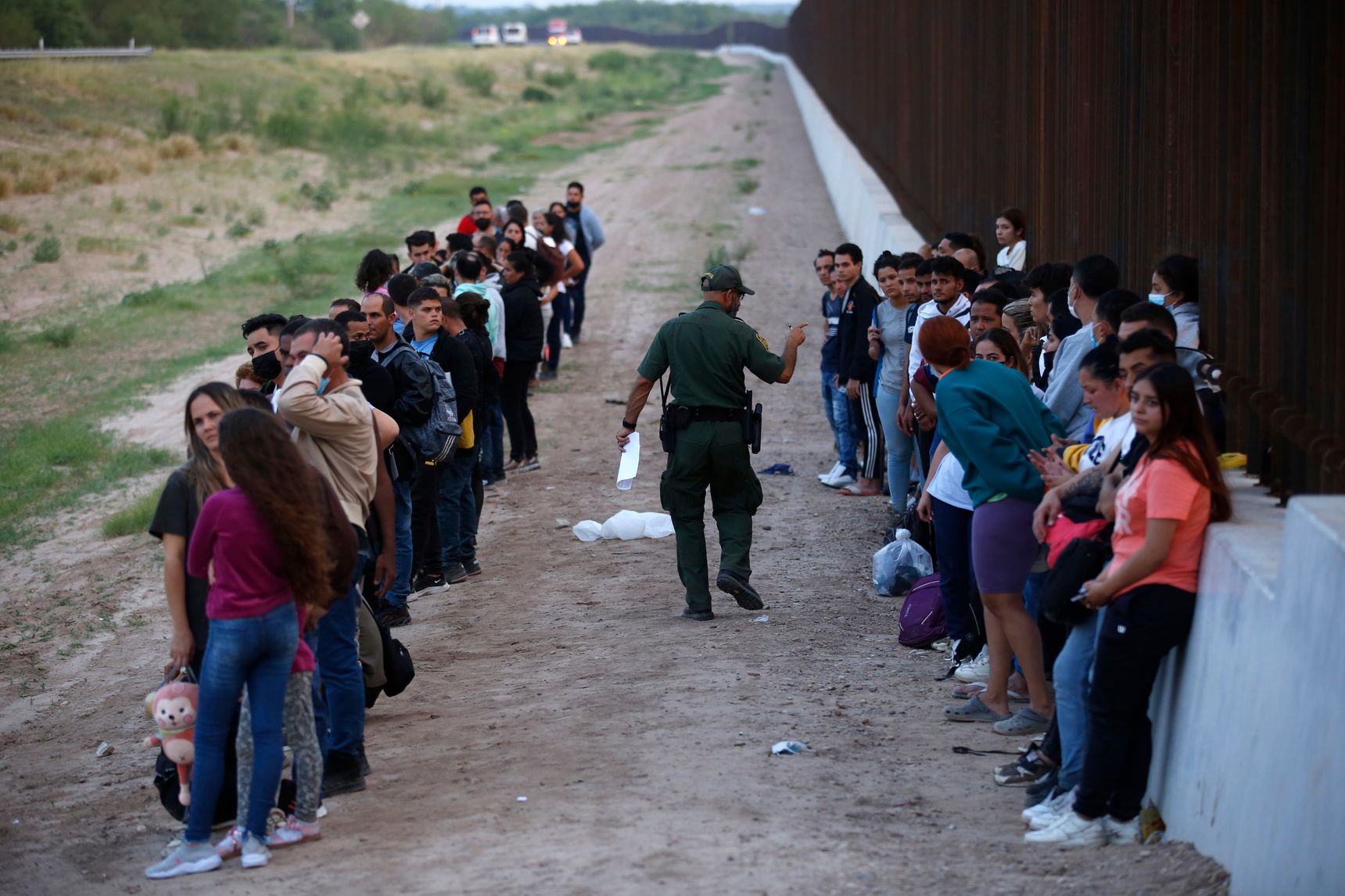 Over 187,000 Venezuelans were apprehended in FY22, including 33,000 in September 2022, prompting the Biden Administration to change policies toward Venezuelans who seek asylum in the US by returning them to Mexico under Title 42. In exchange, the US offered to admit 24,000 Venezuelans who have US sponsors with two-year humanitarian parole visas.

The return-to-Mexico policy led to a sharp drop in the number of Venezuelans encountered at the Mexico-US border in October 2022. Almost seven million Venezuelans have left their country since 2015, and over 150,000 entered the US in 2022.

The number of Venezuelans, Cubans, and Nicaraguans rose steadily throughout FY22

Over 60 percent of the migrant encounters with Border Patrol agents were in four of the nine CBP sectors, including three in Texas, Del Rio, Rio Grande Valley, and El Paso.

Almost 60 percent of FY22 encounters were in Texas

Title 42. Over a million of the foreigners who were encountered in FY22 just inside US borders were returned to Mexico under Title 42, a public health measure invoked in March 2020 to prevent foreigners from spreading covid. Many of the other foreigners encountered were allowed into the US to pursue asylum claims that can last several years because of the backlog of two million cases in immigration courts.

Title 42 removals often result in re-entries because there is no penalty for unauthorized re-entry. Between 2014 and 2019, Border Patrol agents reported an average recidivism rate of 14 percent, meaning that a seventh of those encountered had been arrested at least once before during the previous 12 months. As more migrants were returned to Mexico under Title 42, the recidivism rate rose to 19 percent in September 2022, when 228,000 foreigners were encountered.

Mexicans and Northern Triangle nationals were usually returned under Title 42 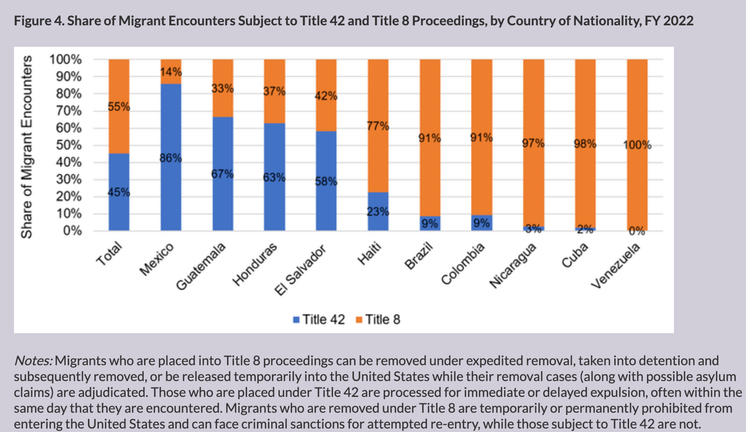 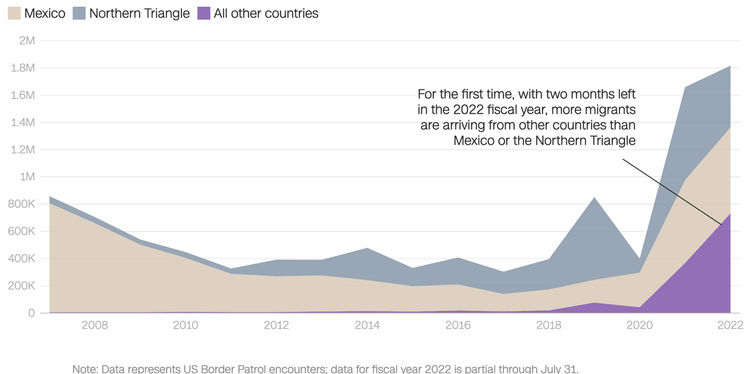 The four leading non-traditional countries in FY22 were Cuba, Venezuela, Colombia and Nicaragua

Polls. The Pew Research Center released the results of an August 2022 poll that found 44 percent of Americans though it was very important to increase security on the Mexico-US border. Combining those who said border security was very and somewhat important means that 73 percent of respondents want more border security, 73 percent support accepting refugees who are fleeing violence and war, and 72 percent support giving unauthorized foreigners brought to the US as children the opportunity to settle in the US.

The Deferred Action for Childhood Arrivals or DACA program, created by President Obama in 2012, provides renewable work and residence visas to unauthorized foreigners who arrived in the US before age 16, graduated from high school, and were under the age of 31 in 2021. These unauthorized youth arrivals are sometimes called Dreamers.

Over 70% of Americans support more border security and DACA 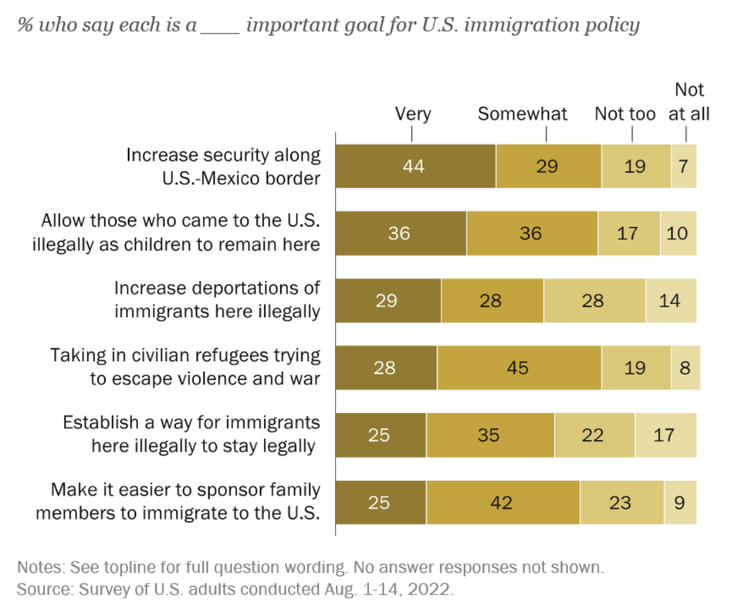 There were significant differences between Democrats and Republicans on immigration. Over 80 percent of Democrats support DACA, a path to legal status for other unauthorized foreigners, and accepting more refugees, while 80 percent of Republicans support increased border security and more deportations.

Democrats and Republicans differ on how to deal with unauthorized migration 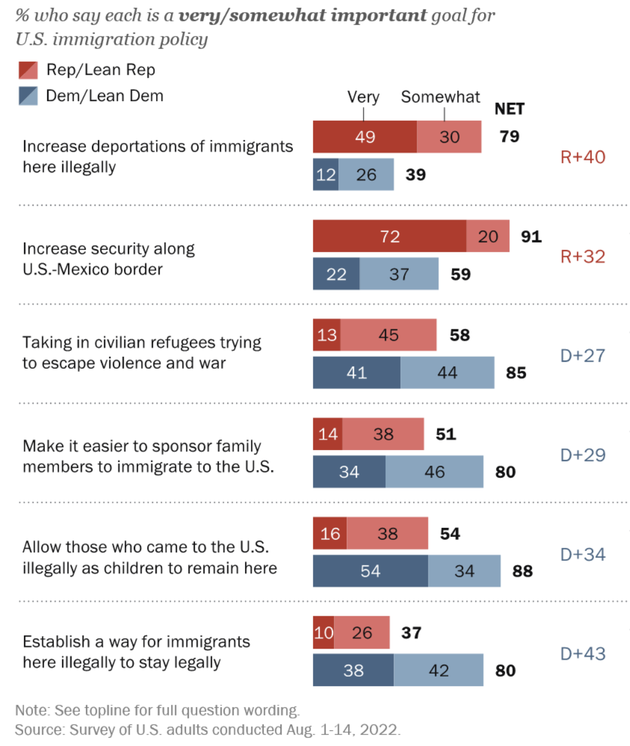 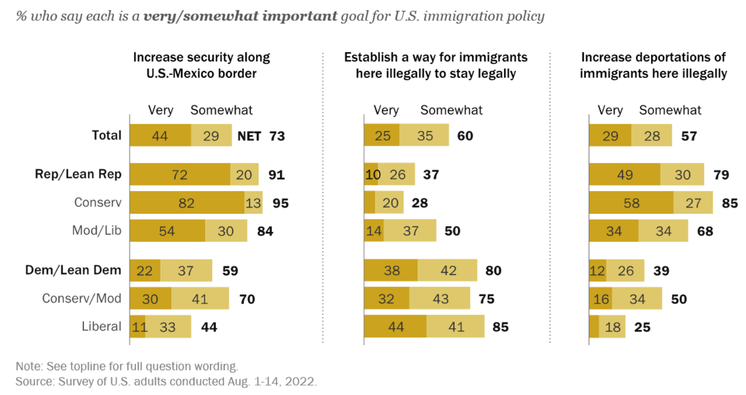 The Chicago Council on Global Affairs has been asking Americans for over two decades whether a large number of immigrants and refugees is a critical threat to the US. The share of all Americans who see large-scale immigration as a threat dropped from over half in the early 2000s to a third today. However, partisan differences widened, so that two-thirds of Republicans consider large-scale immigration a critical threat to the US, compared with a fifth of Democrats.

Differences between Democrats and Republicans on immigration have widened 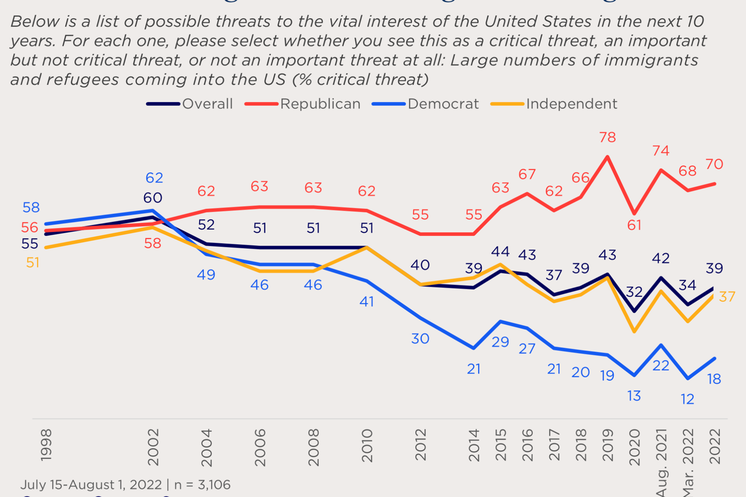 Below is a list of possible threats to the vital interest of the United States in the next 10 years. For eadh one, please select whether you see this as a critical threat, an important but not critical threat, or not an important threat at all: Large numbers of immigrants and refugees coming into the US.

40% of Americans want to keep legal immigration at current levels 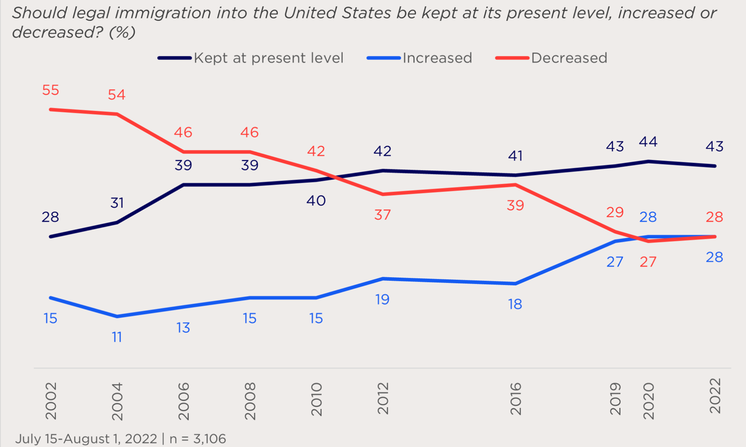 Democrats and Republicans differ on how to deal with unauthorized foreigners