California agriculture employs up to 900,000 workers sometime during a typical year to fill 425,000 full-time equivalent jobs, that is, average employment is 425,000, but more than twice this many unique individuals are employed on the state’s farms sometime during the year due to seasonality and worker turnover. 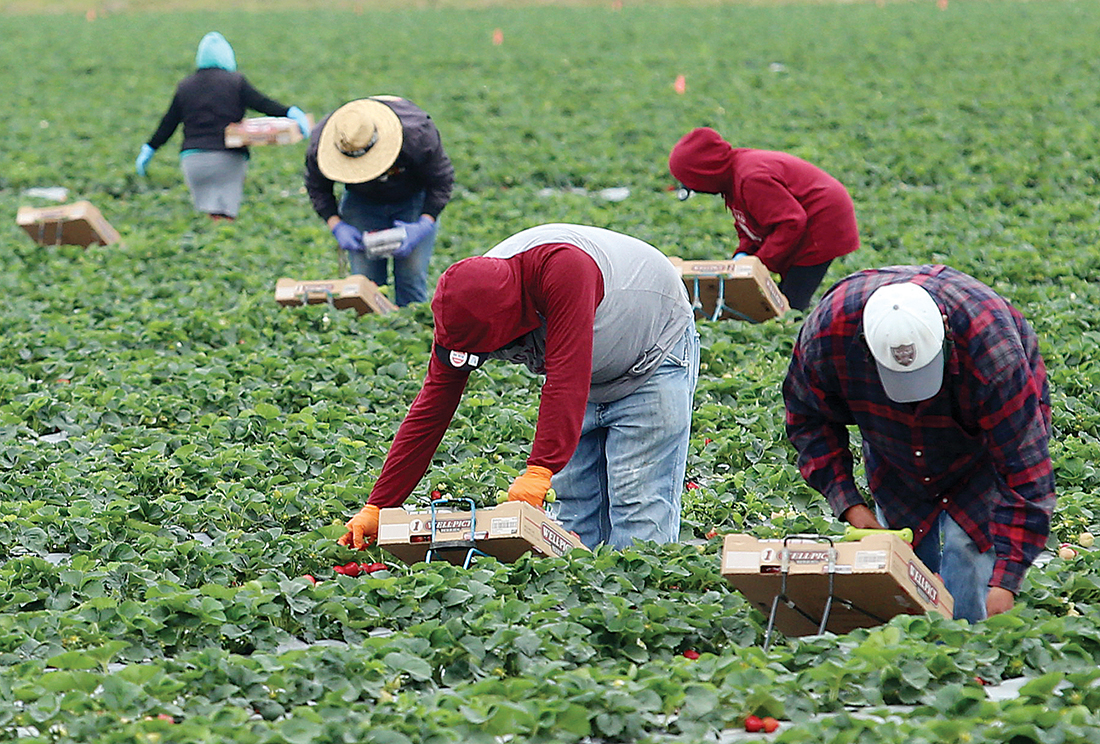 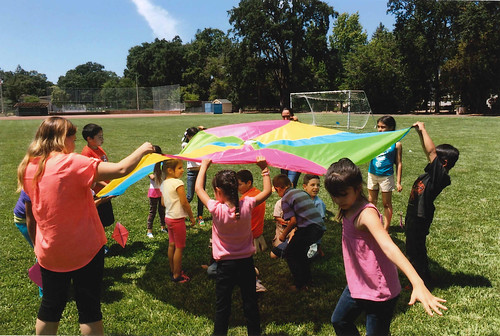 The fresh blood in the farm workforce are Mexican H-2A workers who are a decade younger than settled Mexican-born workers and who often brought to farms by farm labor contractors. H-2A workers cost more per hour, often $25 to $30 including transportation, housing, and other costs, versus $20 to $25 an hour for US workers, including wages, benefits, and payroll taxes. However, H-2A workers are 15 to 30 percent more productive than settled US workers and are tied by contracts to their employers, which provides labor insurance to producers of perishable crops. 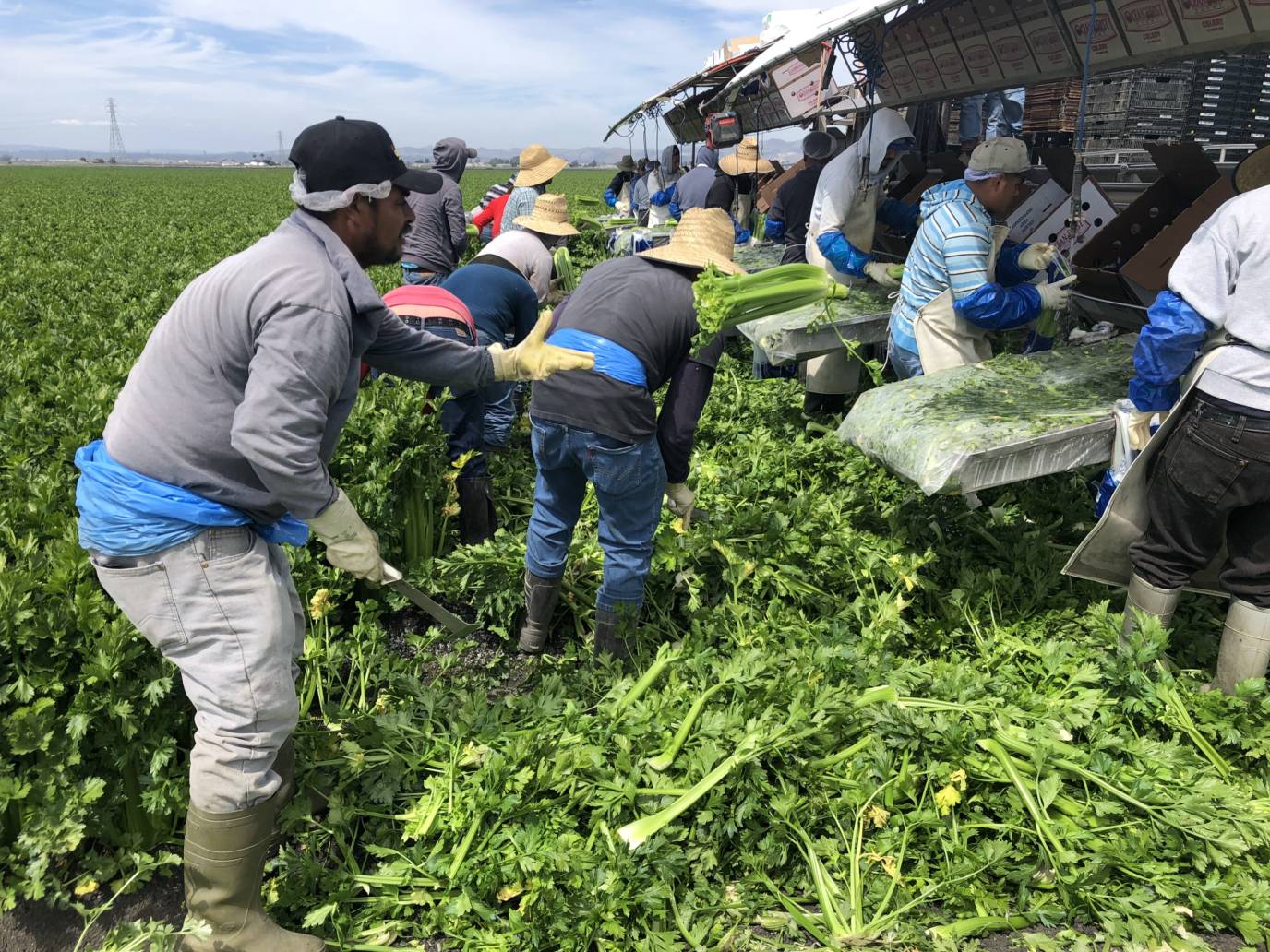 Employment in California agriculture rose slower than overall California employment. Average UI-covered employment in California rose by 15 percent to 14.6 million between 2001 and 2021, and average weekly wages rose 111 percent to $1,660. Weekly wages in agriculture were about half of average statewide weekly wages between 2001 and 2021. The ratio of farm to nonfarm wages peaked at 52 percent in 2016 and was 47 percent in 2021, which was the average farm-nonfarm wage ratio in the 21st century. 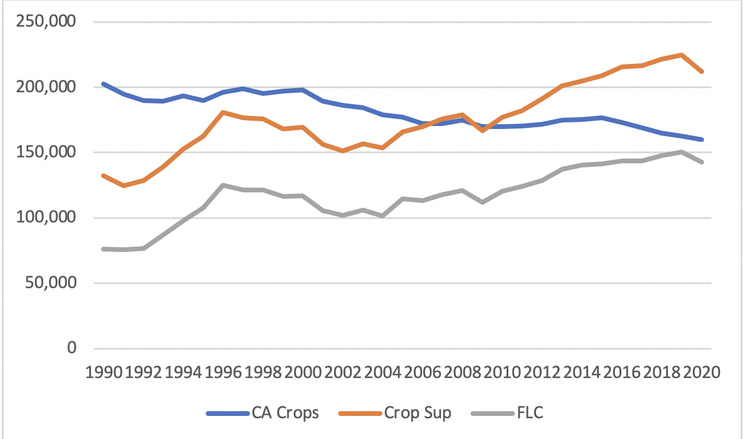 Employment in California livestock (112) was stable in the 21st century at 28,000, with little month-to-month variation. Livestock workers are concentrating on fewer and larger farms; the number of livestock establishments fell 30 percent from 2001 to 2021, from 3,600 to 2,500. The average weekly wages of livestock workers doubled in nominal terms to $930 a week in 2021, almost $100 a week more than for direct-hire crop workers.

Farm Workers. DOL’s National Agricultural Workers Survey interviewed 3,582 non-H-2A crop workers in California between 2015 and 2019, almost 900 a year, and found that these workers are aging, settling in one place with one farm employer, and are half unauthorized. The personal incomes of settled farm workers averaged $2,000 a month from farm earnings of about $600 a week for 35 to 40 weeks a year. Most settled California crop workers want to continue to do farm work as long as they can.

The California NAWS found that the state’s crop workers were 70 percent men who were an average 40 years old, including a sixth who were 55 or older. Almost two-thirds were married, and almost 60 percent were parents. Those with minor children had an average two children under 18 living with them, including 30 percent with three or more minor children. Almost 85 percent of NAWS interviewees were born in Mexico, and 80 percent had been in the US at least 10 years. 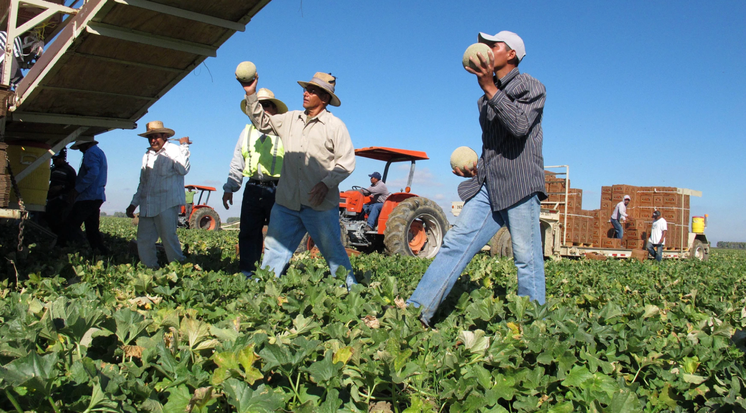 California crop workers had an average eight years of schooling. Almost 90 percent said that Spanish was their primary language; only three percent reported an indigenous language. A sixth said that they can speak and read English well, but 70 percent could not speak any or much English, and three-fourths could read little or no English.

An eighth of California crop workers migrated, typically commuting between homes in Mexico and a California residence. Most migrants had one farm employer in California, while fewer than five percent had at least two US farm jobs at least 75 miles apart or had a home base in the US and traveled at least 75 miles from that home base to do farm work. However, workers employed by a FLC may work on multiple farms that are over 75 miles apart, but are not regarded as migrants if they have only one employer.

⅛ of farm workers migrated, and 2/3 of migrants moved from a home in Mexico to a California farm job

¾ of NAWS workers were employed in fruits and vegetables; FLCs and migrants were most common in fruits

A quarter of the workers were harvesting when interviewed, while a third were in technical production tasks such as pruning, irrigating, and operating equipment, a quarter were in pre-harvest tasks such as thinning and weeding, and a fifth were in post-harvest activities such as packing.

¼ of NAWS workers were harvesting; FLC employees and migrants were more likely to be harvesting

NAWS workers earned more than the minimum wage, and more in harvesting than in non-harvesting jobs

Implications. Farm worker data highlight three items. First, is the aging of settled and often unauthorized crop workers who arrived during the period of large-scale unauthorized Mexico-US migration before the 2008-09 recession. Most of these settled workers have relatively little education, have US-born children, and want to continue to do farm work. Most settled Mexican farm workers do not migrate from one farm to another within California, but some are employed by FLCs and move between farms that are more than 75 miles apart.

Second, the NAWS interviews a subset of farm workers, non-H-2A workers who are usually employed directly by crop farmers. Three fourths of NAWS workers are employed directly and work on only one farm each year. Harvesting is often the most labor-intensive task on farms, and harvest workers are often brought to farms by FLCs to pick fruits and vegetables. FLC employees who may be on farms only for short periods may not be interviewed in the NAWS in proportion to their share of the farm workforce.

Third, the dynamic and growing H-2A share of the farm workforce is not interviewed by the NAWS. The limited data available on H-2As suggest that they tend to be younger and more productive than aging and settled workers, which helps to offset the higher recruitment, travel, and housing costs of H-2As. If current trends continue, H-2As will likely increase their share of California farm workforce from the current five percent.