World wine consumption is 1.1 gallon or 5 bottles a year for each person 18 and older

Spain has almost a million hectares of vineyard, the most of any country, followed by France, 800,000 hectares, and Italy, 700,000 hectares. China and Turkey have large vineyard areas, but many of their grapes are devoted to table grapes and raisins.

Spain has 1/7 of the world’s 7.3 million hectares of vineyard

France, Italy, and Spain produce almost half of the world’s wine

Trade. Some 112 million hectoliters of wine worth E34 billion ($36 billion), over 40 percent of global production, is traded over borders. Spain was the largest exporter of wine by volume, exporting 23 million hectoliters or a fifth of global wine exports, and France was the leading exporter by value, exporting E11 billion worth of wine or 30 percent of the global total.

Spain, Italy, and France account for over half of global wine exports

Australia was the sixth largest producer and fifth largest exporter of wine in 2021, just behind Chile. Over 60 percent of Australian-produced wine is exported, and over half of Australia’s wine exports went to China in 2019. In 2018, Australia banned China’s Huawei from its 5G network, and in 2020 then PM Scott Morrison called for independent inquiry into the origins of covid. China reacted by imposing tariffs on Australian farm exports including wine, reducing Australian wine exports to China by 95 percent in 2021.

Higher priced wines that cross borders are often bottled and shipped in cases; a 20-foot shipping container holds 800 cases on 10 pallets. A case of wine is nine liters, so one container has 7,200 liters of bottled wine. A third of the wine that crosses national borders is bulk wine, which is usually transported in bladders that fit inside 20-foot containers and hold 24,000 liters; the wine is sometimes blended at the destination before bottling. Over half of the wine exported from Australia and Spain is shipped in bulk containers.

Germany, the US, and UK accounted for almost 40% of global wine imports

Sparkling. Sparkling wines release bubbles when uncorked as CO2 is released. The production of sparkling wine has been increasing, topping 20 million hectoliters in 2018, almost double the 2000 production levels.

Italy produces five million hectoliters or a quarter of the world’s sparkling wines, mostly Prosecco, which uses the Charmat process that adds yeast and sugar in a closed tank to create CO2. France produced four million hectoliters or 22 percent, including over 60 percent Champagne, with the other 40 percent crémant; both Champagne and crémant grapes must be hand-picked with the yeast and sugar added in the bottle.

Germany produced 14 percent of the world’s sparkling wines or Sekt, using both German and imported grapes, and Spain 11 percent, mostly Cava that adds yeast and sugar in the bottle. 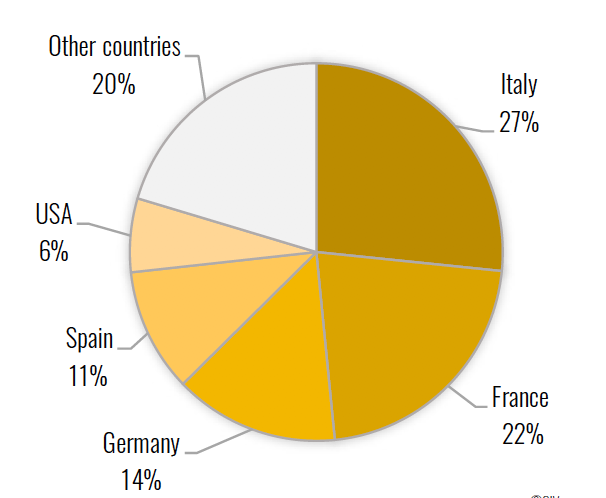 Germany, France, and the US consume almost half of all sparkling wine 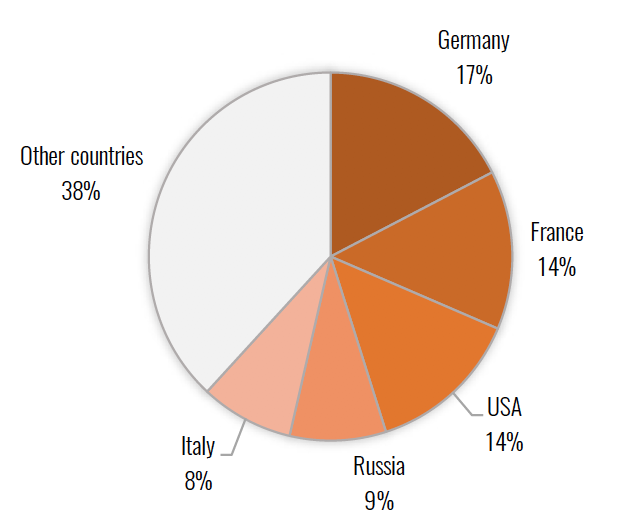 Sparkling wine consumption is rising in the US and UK