US Fruit and Vegetable Trade

The US had an agricultural trade surplus in most years between 1960 and 2020 because exported farm commodities were worth more than the commodities that were imported. The US farm trade surplus has turned into a deficit in recent years as the US imports more fruits and vegetables, which are more valuable than the corn and soybeans that dominate among US farm exports.

The US ag trade surplus has become a deficit

Half of US farm imports are horticultural products, including $30 billion worth of fresh fruits and vegetables 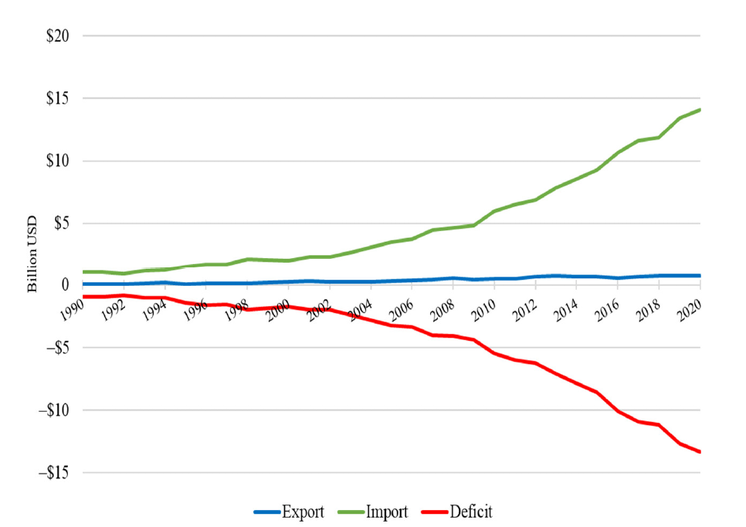 Avocados account for ⅓ of US fresh fruit imports from Mexico 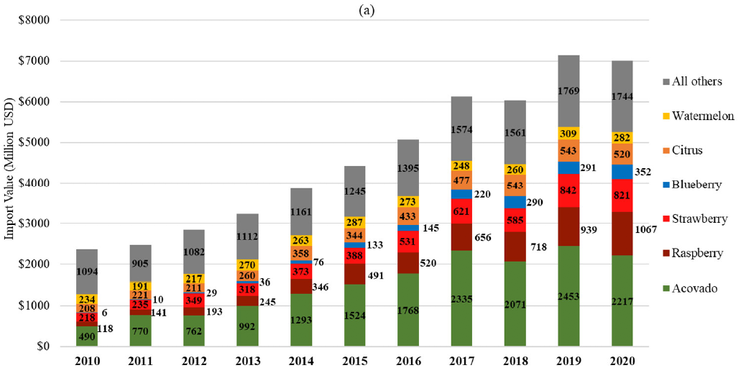 Tomatoes account for ⅓ of US fresh vegetable imports from Mexico 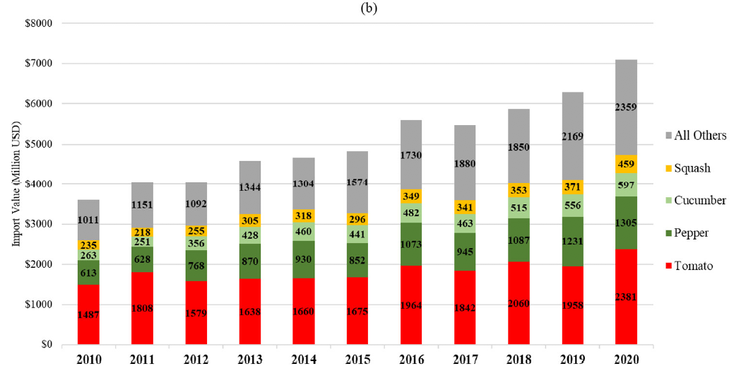 Individual commodities highlight the dominance of Mexican imports in US consumption. Americans consume about eight pounds of avocados a year, including 90 percent imported from Mexico. US production of avocados has remained stable, so the growth in US avocado consumption has been satisfied by imports from Mexico.

Americans consume 8 pounds of avocados a year, including over 7 pounds from Mexico 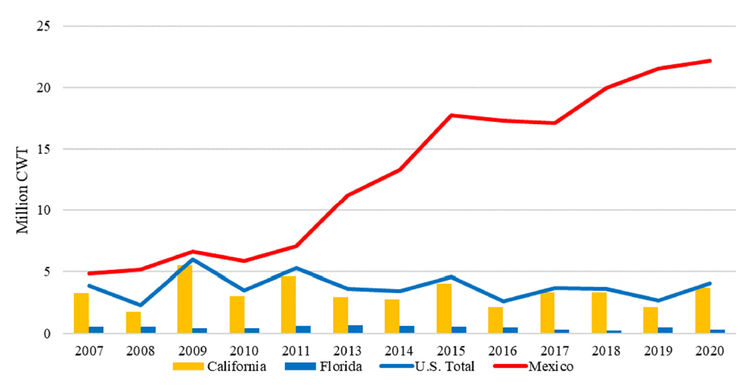 Raspberries are the most valuable fresh berry imported from Mexico, and provide most of the fresh raspberries consumed in the US. Harvest seasons increasingly overlap as Mexico extends its shipping season from the traditional months of October through June. 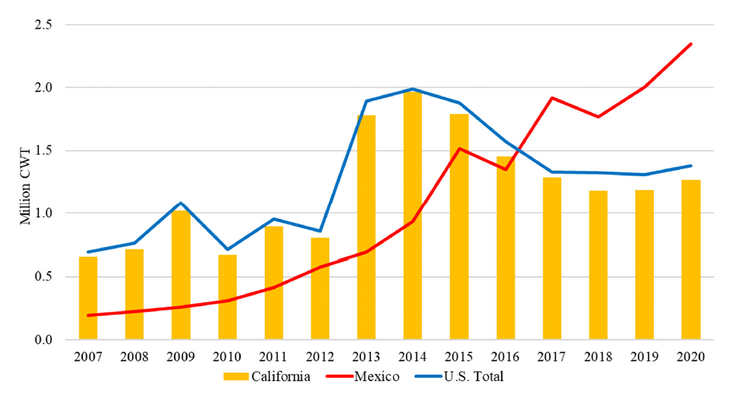 Fresh strawberries are the most valuable US-produced berry, worth over $2.5 billion a year. US production peaked in 2012-14 before falling as imports from Mexico rose. Mexico exports fresh strawberries to the US between November and March, competing more with strawberry production in Florida than in California.

Most fresh strawberries are produced in the US, but imports from Mexico are rising

Blueberries are produced in many US states and imported from Canada, Mexico, Peru, and Chile. A rising share of the fresh blueberries consumed in the US are imported, including from Mexico, which has prompted complaints from growers in southeastern states whose spring production competes with Mexican imports.

Mexican exports of fresh blueberries to the US increased rapidly 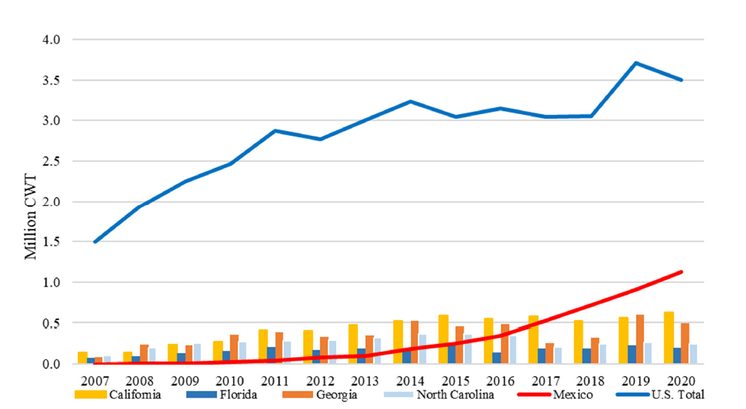 Fresh tomatoes demonstrate Mexico’s competitive advantage. Until 2010, most of the fresh tomatoes consumed in the US were produced in CA and FL, often in open fields and picked while green and ripened with ethylene gas. Mexican and Canadian tomatoes, on the other hand, are often grown in CEA structures, under glass or plastic-covered structures that protect plants from weather and pests, raising yields and permitting year-round production and exports.

Over 60% of US fresh tomatoes are imported; most tomato imports are from Mexico 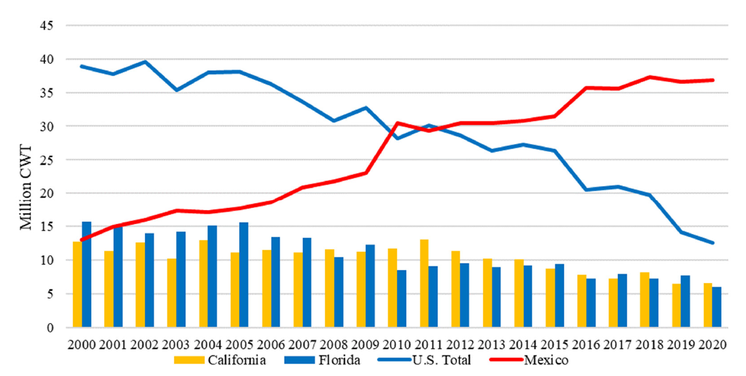 Fresh peppers tell a similar story of rising imports from CEA structures in Canada and Mexico. Imports from Mexico surpassed US production in 2015, and the Mexican share of the bell pepper market increasing; most bell peppers are harvested in Mexico between November and April.

Mexico provides most of the peppers consumed in the US

Similarly, imports of Mexican cucumbers have exceeded US production since 2007, and cucumber imports are rising while US production is falling.

Most US fresh cucumbers are imported from Mexico

Mexico accounts for over 90% of many fruit and vegetable imports

There are several major reasons for rising imports of fresh produce from Mexico. The first is free trade, including NAFTA since 1994 and USMCA since 2020, which reduced trade barriers. Second is a latecomer advantage that means many Mexican fruits and vegetables are produced in CEA structures that save on water and pesticides, facilitate organic production, and often mean higher quality commodities. Third are Mexican labor costs that average a tenth of US farm labor costs and relatively quick and cheap truck transport to US consumers.