Remittances, the monies sent to countries of origin by migrants abroad, reached a record $626 billion to low- and middle-income countries in 2022. Remittances are three times Official Development Assistance (ODA) and exceed Foreign Direct Investment (FDI), making them the largest financial flow from richer to poorer countries. Remittances have reached new records every year despite a wide range of challenges, from closed borders during covid to a weakening Euro that reduces the value of remittances sent from Europe in dollar terms. 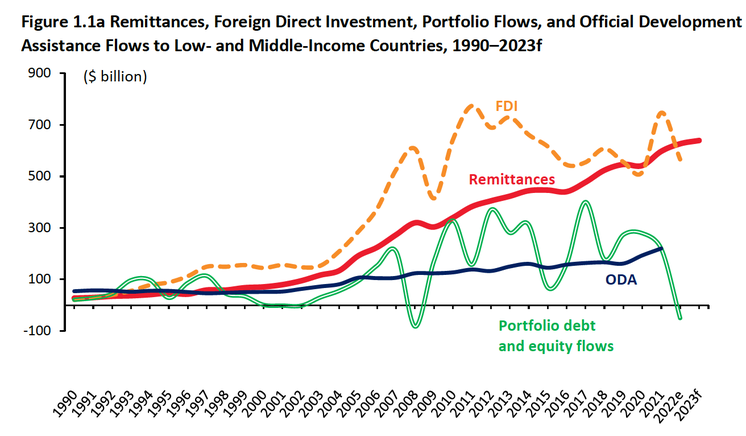 The top eight recipients of remittances in 2022 were India, Mexico, China, the Philippines, Egypt, Pakistan, Bangladesh, and Nigeria. These countries received a total of $352 billion or 56 percent of total remittances to LDCs. The countries most dependent on remittances were island nations such as Tonga, those mired in economic distress such as Lebanon and Haiti, and ex-USSR countries as well as Northern Triangle Central American countries.

India received ⅙ of LDC remittances; remittances were half of Tonga’s GDP 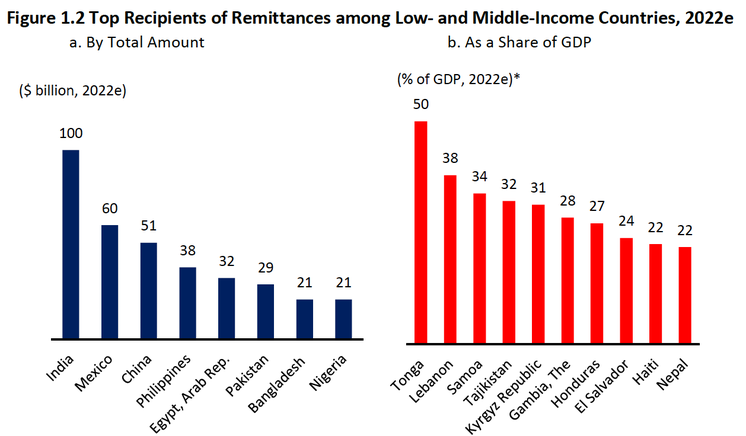 Why did remittances to LDCs surge to record levels in 2022? Analysts cite several factors, including the desire of migrants in richer countries to support families in poorer countries and the reopening of borders to migrant workers. Currency movements affected remittances measured in USD, such as the increase in remittances from Russia as the ruble strengthened and the declining value of remittances sent from Europe as the Euro fell relative to the USD.

Mexico received over 40% of Latin American remittances; the remittance share of GDP was highest in the Northern Triangle 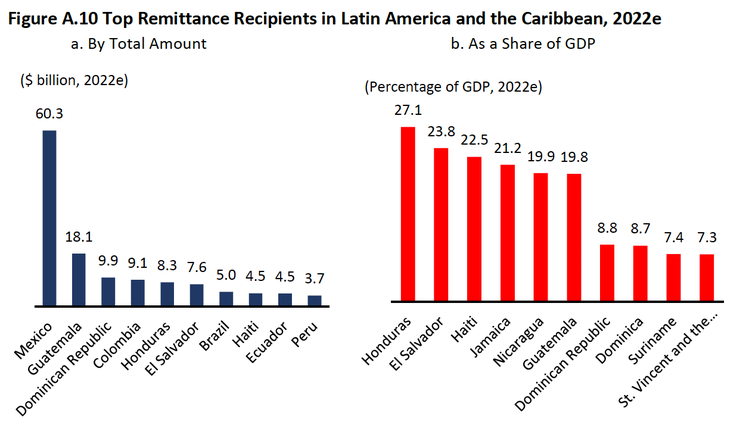 Some of the remittances to Mexico may represent transfers to non-Mexican migrants who are transiting Mexico to apply for asylum in the US, as US-based relatives send money to pay living and smuggling costs. A record 2.4 million foreigners were encountered just inside the US border in FY22; less than half were Mexicans.

Border Patrol agents had a record 2.4 million encounters with unauthorized foreigners in FY22 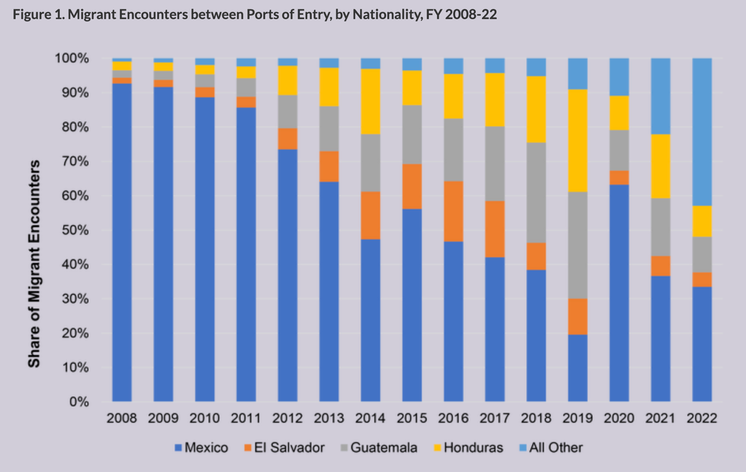 Migration. The number of international migrants, defined as persons outside their country of citizenship a year or more, fell by two million in 2020 due to covid-related border closures, but rebounded in 2022 as borders reopened and employers reported difficulty filling jobs.

The UN estimated that there were 281 million international migrants in 2020, including 182 million or 83 percent in high-income countries. Migrants were 3.6 percent of the global population, reflecting a steady increase over the past half century. Some 169 million migrants were in the labor force of the country to which they moved, including 114 million or two-thirds who were in high-income countries.

The number and share of migrants has been increasing 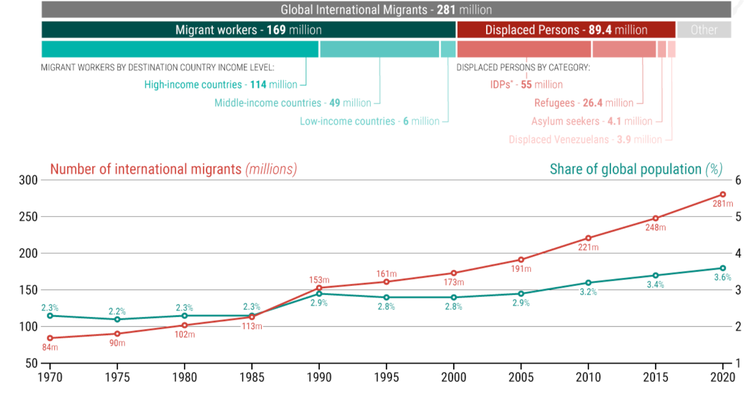 Migration between countries is sometimes divided into bilateral corridors, such as the Mexico-US corridor that involved the movement of over 11 million Mexicans to the US. All other migration corridors involved fewer than four million migrants, as from Syria to Turkey or India to the UAE.

India is the #1 country of emigration, and the US is the #1 immigration country

Most movement over national borders reflects the search for more economic opportunity, followed by smaller flows of refugees and asylum seekers. Migration due to climate change was in the spotlight in 2022 because of the Conference of the Parties or the COP27 meeting held in Egypt to discuss progress toward limiting the increase in global temperatures to 1.5C or 2.7F above pre-industrial levels.

Developing countries want rich countries that emitted much of the carbon in the atmosphere to create an international fund to pay for damage due to storms, droughts, and heat waves. Rich countries promised $100 billion a year for climate adaptation by 2020, but provided only $30 billion, and promised $40 billion a year by 2025. However, many rich countries fear that creating a climate damages fund could lead to court judgements finding them liable for damages in future suits.

COP27 agreed to establish a committee of 24 nations to work out the details of creating and administering a climate damage fund. However, attributing specific weather events to climate change may prove difficult, which could make it hard for e.g. Pakistan to receive compensation for 2022 floods, which were aggravated by settlement on flood plains and inadequate river management.

The world’s population reached eight billion on November 15, 2022, including 1.3 billion in Africa, where rapid population growth is due to high fertility. The population of CPO27 host Egypt increased from less than 30 million in 1960 to over 100 million in 2020, prompting the government to urge families to limit themselves to two children.

Africa is projected to have 40 percent of the world’s population in 2100, almost four billion, and half of the world’s people under 18. One result is likely to be some of the world’s largest cities. The 600 miles between Abidjan and Lagos is expected to be the largest African megalopolis, the term used to describe cities that are not always physically connected but share an economic space, such as the 50 million people in the 400 miles between Wash DC and Boston.

By 2030, the Abidjan-Lagos megalopolis could have 40 million people, and 500 million by 2100, making it the largest megalopolis in history. African megalopolises tend to sprawl outward rather than upward, leading to massive traffic jams due to the absence of public transportation. Algiers and Cairo are the only African cities with underground commuter lines.

Lagos is Africa’s largest city, with over 16 million residents 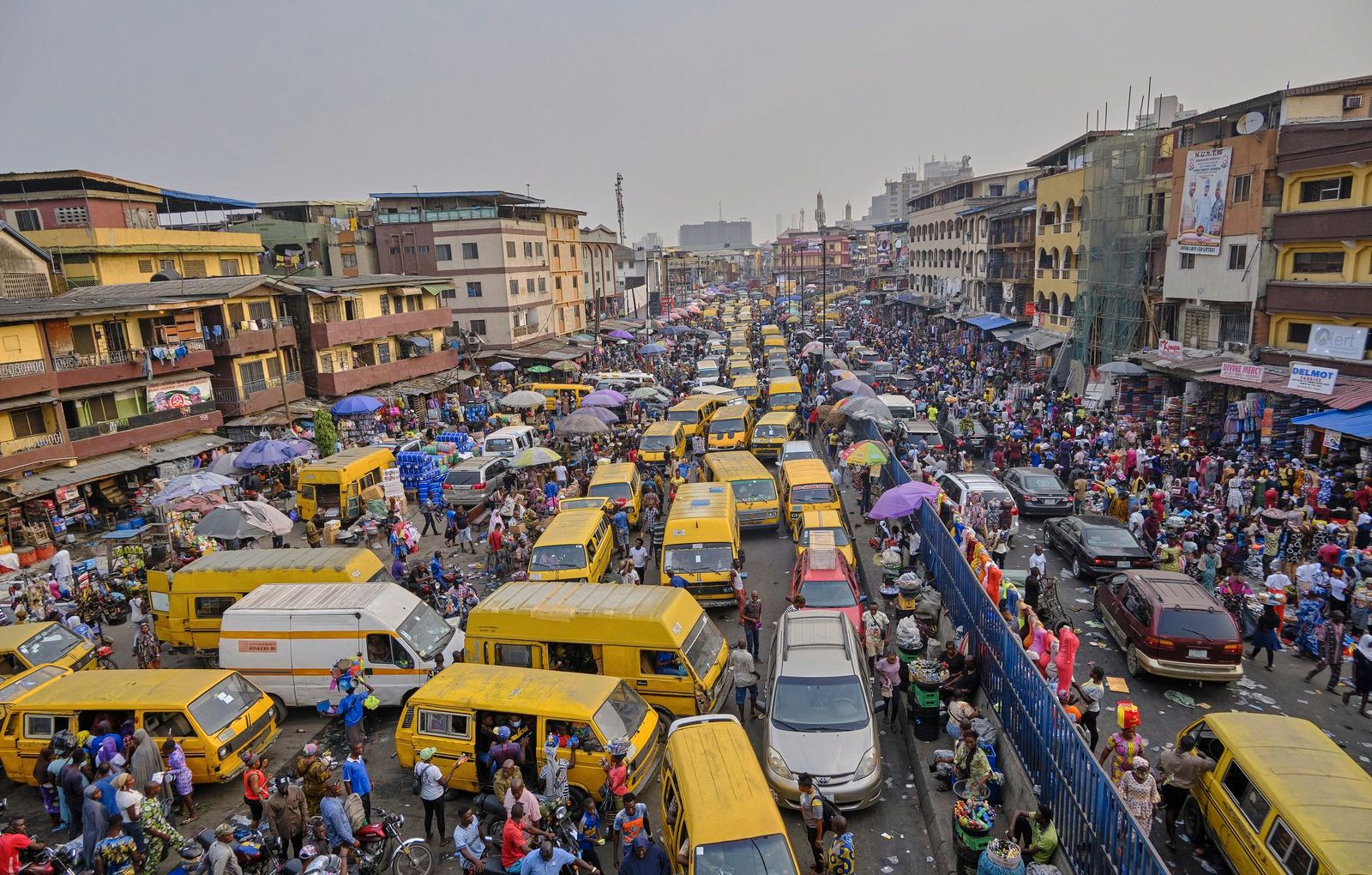