The H-2A program allows US farmers who anticipate shortages of seasonal workers to be certified by DOL to recruit and employ H-2A workers to fill seasonal jobs, usually for up to 10 months. Employers certified by DOL submit petitions to DHS for approval, which forwards them to DOS consulates abroad; DHS admits workers with visas.

The H-2A program almost quadrupled over the past decade, from less than 100,000 jobs certified in FY13 to almost 400,000 in FY22. The Bracero program, which admitted Mexican guest workers to fill seasonal farm jobs between 1942 and 1964, had a similar rapid expansion in the 1950s. During WWII there were a peak 62,000 Bracero admissions; some 67,000 Braceros were admitted in 1950. The number of admissions then increased sixfold to 445,000 in 1956 before declining to less than 200,000 a year in the early 1960s. One reason for this jump was Operation Wetback in 1954-55, which expelled unauthorized Mexicans and encouraged farmers to hire Braceros. 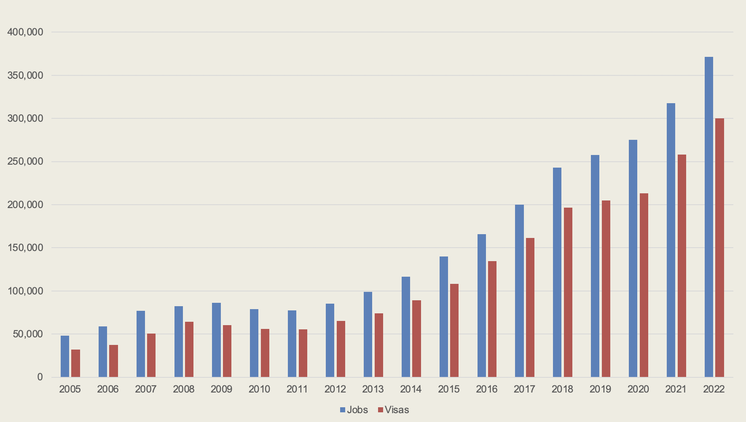 About 80 percent of H-2A job certifications result in H-2A visas being issued; some employers do not follow through and recruit H-2A workers and some H-2A workers fill several US jobs. Over 93 percent of the 300,000 H-2A visas are issued to Mexicans, followed by South Africa, three percent, Jamaica, two percent, and Guatemala, one percent.

States. Historically, the H-2(A) program has been used mostly by east coast farmers to recruit Caribbean workers, while the Bracero program recruited Mexicans for jobs in western states. Beginning with NC growers in the mid-1990s, most east coast growers switched to Mexican workers; many of the less than 10,000 Caribbean H-2A workers today are employed in the northeastern states. 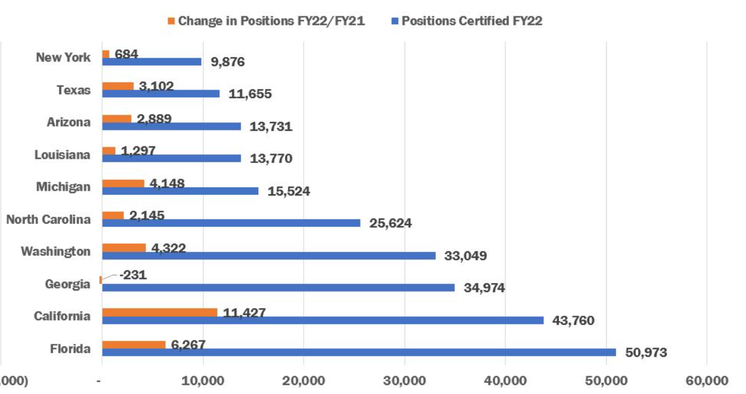 Most growth in H-2A certifications is likely to be in states such as CA, MI, WA where H-2A workers are a smaller share of farm workers.

Employers. The 10 largest H-2A employers accounted for almost 50,000 or an eighth of all H-2A certifications. Two of the 10 largest were employer associations, one was a grower, and seven were FLCs.

Until recently, most H-2(A) workers were brought to the US by associations. For example, the Florida Fruit and Vegetable Association handled the recruitment of 10,000 Jamaicans to cut sugar cane in southern Florida between the 1950s and 1990s; sugar mills such as US Sugar were the employers of the cane cutters. Similarly, employer associations in the northeastern states and NC handle the recruitment and transportation of H-2A workers on behalf of many employers who have fewer than 10 H-2A workers.

Some employer associations are only recruiters and transporters of H-2A workers, while others are joint employers with the farms where H-2A workers are employed. Some associations act as FLCs, housing workers in central locations and moving them from farm to farm.

Private for-profit recruiters such as Mas Labor have replaced employer associations to recruit and transport H-2A workers to many farms. In most cases, the workers are employees of the farmer who houses them, and Mas Labor may enter the picture again to arrange return transport at the end of the season. Recruiters typically charge $1,200 to $1,500 per worker for recruitment, visa processing, and transport to and from US farms.

The third type of employer is a FLC who handles all aspects of the H-2A process, from recruitment abroad to employment in the US and returns. The largest H-2A FLC is CA-based Fresh Harvest, which was certified to fill 8,500 jobs with H-2A workers in FY22. FLCs act as turn-key labor providers, housing H-2A workers and transporting them to and from farms to perform specified tasks.

AEWRs. US migration policies generally give US workers first priority to fill vacant jobs. The H-2A program includes two major protections for US workers. First, employers must advertise their jobs, interview US worker applicants, and hire them or explain why the US workers were not hired. Second, employers must offer and pay to US and H-2A workers an Adverse Effect Wage Rate that is higher than the federal or state minimum wage, an average $16.62 in 2023. 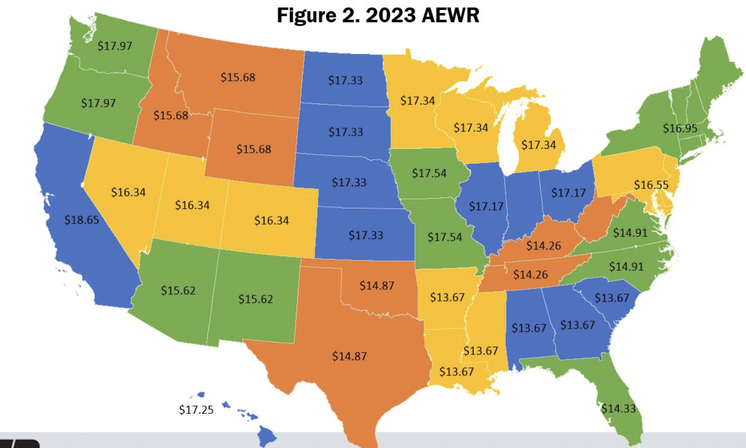 Both US worker protections are controversial. Employers complain that US workers do not want the jobs they offer, while worker advocates assert that employers who have identified the H-2A workers they want to employ discourage US workers from applying and accepting jobs. Fewer than five percent of the H-2A jobs advertised by US employers are filled by US workers.

Similarly, employers complain that the AEWR is artificially high because it is pulled up by the inclusion of equipment operators and other skilled workers, while worker advocates emphasize that the AEWR can act as a wage ceiling since US workers who would accept the job at a higher wage can be deemed unavailable and not hired. The AEWR is the previous year’s average hourly earnings of crop and livestock workers that farmers hire directly.

Scenarios. The H-2A program is expanding in all states and commodities via FLCs, associations, and direct employer recruitment. How could the H-2A program be streamlined for the 21^(st) century?

First, after one or two years in the program, A-rated employers and returning migrant workers could receive multi-year certification and multi-year visas so that both could plan for future employment. A-rated farm employers could presume that their job orders would be certified if they change only the wage rate, number of workers, and start and stop dates, and self-certify that their housing satisfies standards.

A-rated workers with multi-year visas could skip the US consulate and leave for US jobs from their homes, showing the current job offer that includes employer contact information at ports of entry so that CBP can confirm the job contract with the employer. Multi-year visas would allow H-2A workers to fly to US jobs instead of first travelling by bus to the US consulate in Mexico for several days and then continuing by bus to the US workplace.

Multi-year certification and visas could benefit employers and workers

Longer-term certification for A-rated employers and workers would provide more certainty for employers and give workers an incentive to learn English and undergo training to improve their productivity and earnings. Workers could become more familiar with their contracts and employers, so there would be fewer opportunities for recruiters abroad to take advantage of workers.

Second, expanded reliance on returning H-2A workers could support FIFO-style labor models. Remote mining and energy extraction often relies on workers who fly in, work long hours for four to 12 weeks, and then fly out. These workers are trained at home, so that the minimum number of workers is required in the remote area to accomplish the work. Support personnel, from supervisors and drivers to cooks and mechanics, have similar FIFO schedules, which makes staffing a turn-key just-in-time operation.

The closest analogy to FIFO in H-2A is custom combining, which often involves H-2A workers who operate equipment and drive trucks from south to north, beginning in New Mexico and Texas and moving north to Canadian prairie provinces. Grain farmers get their crops harvested efficiently with modern equipment that operates for longer periods, and harvest workers maximize their seasonal earnings between May and October. Some of these H-2A workers are from Southern Hemisphere countries such as South Africa that are experiencing winter. 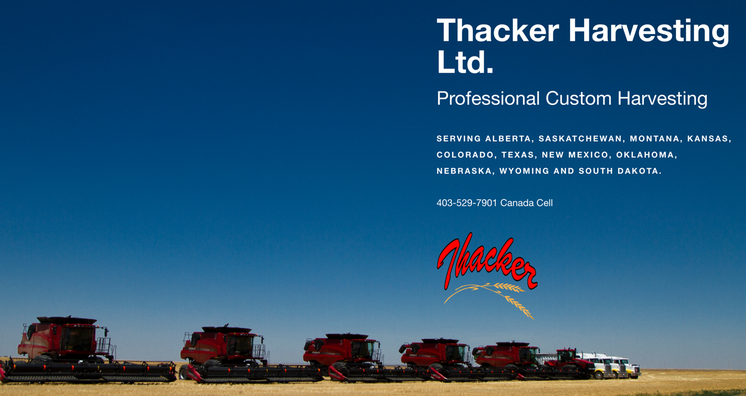 Extending this turn-key crew approach to hand-harvested commodities would involve training crews abroad so that they arrive experienced and ready to work. A crew-based approach could take advantage of migrant networks to maintain efficient workforces, recruiting and training additional workers in the country of origin.

Third is improving recruitment in sending countries. The major issue is an excess supply of workers seeking higher wage jobs abroad, which allows some recruiters to charge workers for access to foreign jobs. The ILO and many national governments obligate employers to pay all or most costs for migrant workers, but policing this employer-pays-all-costs requirement in the rural areas where many migrants live is very difficult.

The US government, in trying to increase recruitment in the Northern Triangle countries of El Salvador, Guatemala, and Honduras, is subsidizing the creation of

work-ready pools. This means that local labor ministries recruit and screen workers that are open to employers who interview and select individuals. Experience with work-ready pools is very mixed, replete with stories of workers having to bribe government officials or politicians to get into the work-ready pool and the workers in the pool not qualified for the work abroad.

A better strategy may be to favor large US-based recruiters who can afford to invest in systems to screen and train crews of workers and achieve economies of scale in recruitment. Multi-year certification and multi-year visas reduce costs and worker vulnerability during recruitment, while longer time horizons for reputable recruiters gives them an incentive to maintain their reputation for lawful recruitment of productive guest workers.

Más Labor may be the largest US recruiter, processing 60,000 H-2A and H-2B visas a year

The effect of multi-year certification and visas, work-ready crews, and fewer and larger recruiters could reshape the H-2A program from one where DOL handles thousands of applications from employers seeking a few H-2A workers to DOL dealing with a relative handful of recruiters who ensure that applications are correct and compliant before they are submitted. Other countries, including Australia and the UK, require individual farms to use approved agencies to recruit guest workers.

Employers and guest workers who know that their relationship will persist for several years, crew-based work units, and recruitment and transport organized by fewer and larger entities could generate the win-win outcomes of temporary labor migration that are desired by employers and workers as well as labor-sending and -receiving governments. 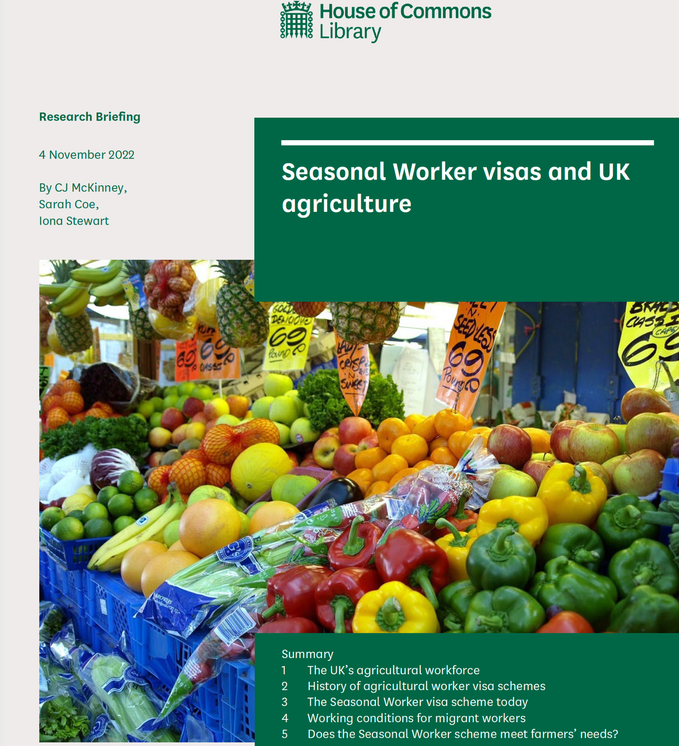